Peter Christopher, author, photographer and Director of the volunteer, not for profit, Clipper Ship City of Adelaide Ltd

Questions?
For any questions regarding the event, please reach out to the Royal Geographical Society of South Australia Inc.:
Email: admin@rgssa.org.au
State Library Supports

Built in Sunderland UK in 1864, the City of Adelaide was named after the city to which it carried migrants for 23 years. It is a composite vessel, with iron frames and a wooden hull.  In 1893 the ship stopped sailing and became an isolation hospital in Southampton. In 1923 the Royal Navy took it over, renamed it HMS Carrick and moved the ship to Scotland as a cadet gunnery training vessel and later as the Royal Navy Reserves club rooms on the Clyde River, Glasgow.

After sinking in 1991, it was raised and moved onto private land. In 2000 the vessel faced being broken up, and an Adelaide volunteer campaign to save ship started. The team was successful in lifting the ship in a cradle and transporting it to Port Adelaide, arriving in February 2014. Meanwhile, HRH The Duke of Edinburgh renamed the ship back to its original name, City of Adelaide. The ship will be moved to form the centre piece of a Seaport Village. 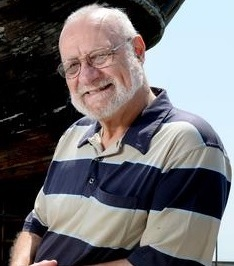 Peter Christopher is a Director of the volunteer, not for profit, Clipper Ship City of Adelaide Ltd, the organisation set up to save the historic ship. He convened the first meeting in 2000 and continues to be involved. Until 2015 he was the Chief Industrial Officer of the Public Service Association.

Peter has dived on and researched shipwrecks and paddle steamers throughout Australia. He is the author of seven books on shipwrecks and riverboats. He is now working on creating the Seaport Village at Port Adelaide.

The Mortlock Chamber may close for private events, check our opening hours for any closure times.

When it is open you can visit the Mortlock Chamber on the ground floor to look at the exhibition bays.  The upper levels of the Mortlock Wing include quiet study areas.

The story of the clipper ship “City of Adelaide”