This book has a fascinating history. It was borrowed from the Adelaide Circulating Library more than 100 years ago by a young Lawrence Bragg, who wrote his name in it. In 2012 it was returned to the State Library by a member of the Bragg family in London.

The book has an appendix by Ralph Tate who is notable as the Foundation Professor of Natural History at the University of Adelaide in 1875, and a key figure in establishing the Royal Society of South Australia.

Lawrence Bragg was born and educated in Adelaide, then studied and taught Natural Sciences at Trinity College, Cambridge, where his work with his father on X-rays was published in 1915. Soon afterward Lawrence realised that X-rays had a dual wave/particle nature-one of the most significant concepts in 20thcentury physics. He was later to work with Crick and Watson to help reveal the structure of DNA. Father and son jointly won the Nobel Prize for Physics in 1915, making Lawrence the youngest ever winner at the age of 25.

Title page of the book A manual of the Mollusca : a treatise on recent and fossil shells.

Inside cover with the signature of Lawrence Bragg of the book A manual of the Mollusca : a treatise on recent and fossil shells.

Page 103 of the book discussed the Australian region.

Page 104 of the book discussed the South Australia and Tasmanian region. 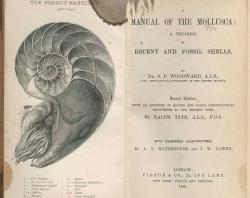 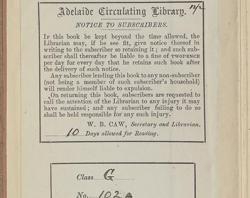