For most people Christmas Eve or Christmas Day is about getting together with friends and family for a special meal and tearing the paper off presents. But special meals can be created and presents given at any time of year. So what makes this time of year so memorable? Is it the church services, the concerts, the songs and carols? Or is it the exchange of cards and greetings, the arrival of Santa, or Christmas trees?

For Christians it’s about the Nativity, the birth of a holy child over two thousand years ago in a little place called Bethlehem. The birth of the Messiah promised to bring peace, understanding and compassion for one another at a time when those ideas were very thin on the ground. Forms of worship grew around the miraculous Christ child.  Stories were told and retold of his birth and death. Eventually a religion formed, then a Church. As the new religion grew, specific services, prayers and rituals developed or were interwoven with existing local celebrations.

Christmas in December was super-imposed over dates sacred to pagan religions. In northern Europe the Druids would collect mistletoe from the oak tree. This marked the passing of the deepest cold of winter, a ritual to mark the sun’s return. The Roman Festival of Saturnalia was also held around the end of December. Its tendency to excess is reflected in the feasting and drinking which marks many celebrations today.

Singing and chanting formed a crucial part of many ancient religions. Chants and hymns of worship developed within many branches of Christianity and over time carols came into being. According to the Shorter Oxford dictionary, the word ‘carol’ means ‘a song or hymn of joy’. In 1933 The Mail printed a lengthy article titled ‘Carol Singing in its Earliest Setting’ on the origins of Christmas Carols. “The first Christmas carols were really dances at which songs were sung. In old France a ‘carole’ was a kind of ring dance. This dance gave its name to the song by which it was accompanied, and so the word passed into most of the languages of Western Europe.” Carols were sung as part of the early mystery plays or pageants.  One of the earliest known  carols was ‘the Angel’s Hymn’ of 129 AD. Two centuries later Telesphorus, the Bishop of Rome decreed that this should be sung on Christmas night. Christmas songs became more widespread but were usually sung in Latin by the clergy. This changed in the thirteenth century when Francis of Assisi added carols to nativity plays, urging people to sing in their native languages. These songs were passed down orally to become folk tradition. Some were later printed like the ‘Boar’s Head Carol’ which was published in 1521.  ‘Bring Us In Good Ale’ dates back to at least 1460. It would have been sung by groups of Wassailers who went from door-to-door carolling in exchange for festive food and drink, especially drink:

One of the State Library's greatest treasures is the 13th century Italian Antiphonal purchased by the Friends of the State Library in 1945. Containing music (Gregorian chant) for monastic Christmas services, many of the vellum pages contain capital letters decorated with gold.  Read more at our
Antiphonal website 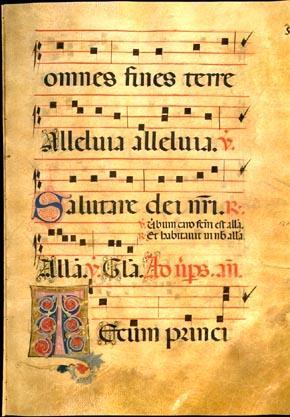 Christmas concerts and choirs are a popular entertainment at this time of year. Carol services only became popular in Britain and across the British empire after the first one was held in on Christmas Eve 1880 by the Bishop of Truro, Edward White Benson. The Victorians became as enthusiastic about carol services as they did about Christmas stories, especially those of Charles Dickens. This was the time when Christmas trees, gifts, cards, dinners, and
indeed all things convivial became integral to the festive season. 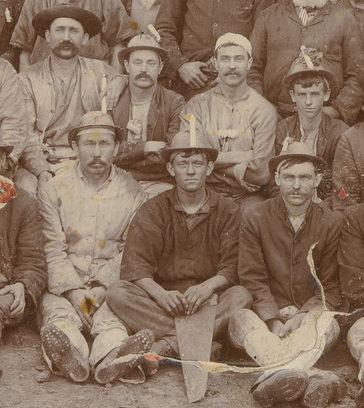 In nineteenth century Moonta, Cornish miners with candles on their hats, would gather to sing carols on Christmas Eve. The tradition of community singing was picked up in Melbourne in 1938 with the first Australian ‘Carols by Candlelight’. In 1944 Adelaide’s first  ‘Carols by Candlelight’ was staged as a joint charity fundraiser by the Commercial Travellers’ Association and radio station 5AD. A huge crowd of 50,000 people attended the concert in Elder Park, holding candles and singing together. Many local councils across South Australia also began their own outdoor Christmas community concerts. The Elder Park concert, was cancelled in 2020 and 2021, going online instead due to COVID19. 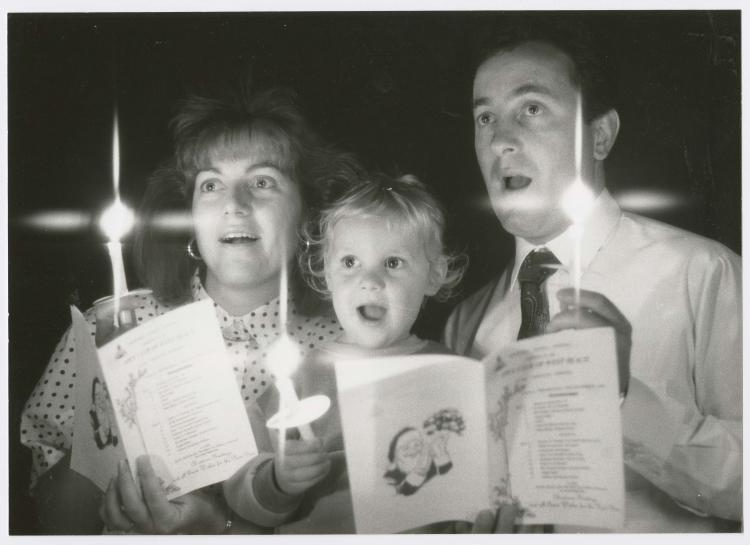 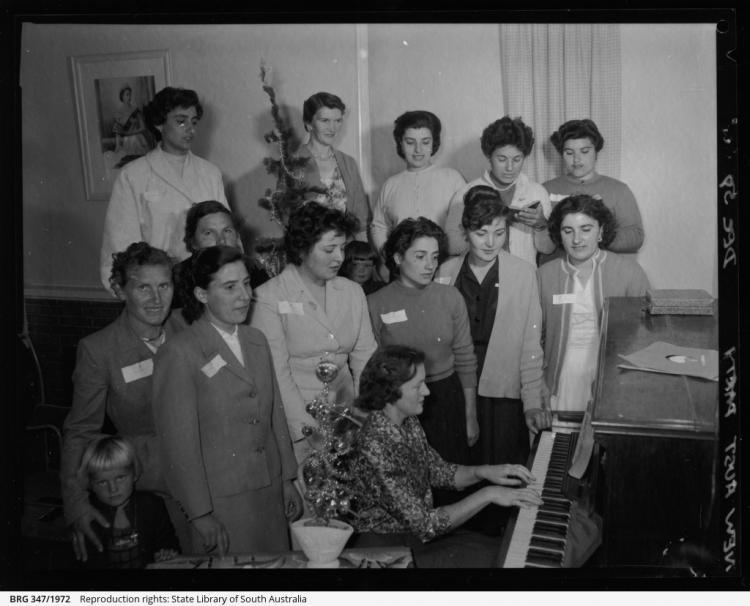 Trees have been used for millennia in places of worship and the hearth as symbols of new life and spring. But it wasn’t until the Victorian era that the Christmas tree became popular in Britain. In 1848 a sketch of Queen Victoria and husband Prince Albert appeared in the Illustrated London News. They were pictured standing with their children around a decorated evergreen fir tree at Windsor Castle.  The trees were originally decorated with apples, and later, nuts, wafers and sweets. These are the origin of today’s shiny hanging baubles and candy canes. Candles on the tree symbolised the stars shining over Bethlehem. Tinsel was invented in Northern Europe, made from threads of silver to enhance the candle light.

Albert had imported the tree from his native Germany where the Christmas tree was a tradition. The idea caught on with the public and the decorated tree became a quintessential part of Christmas throughout the British Empire, including Australia. Here are a few South Australian examples. 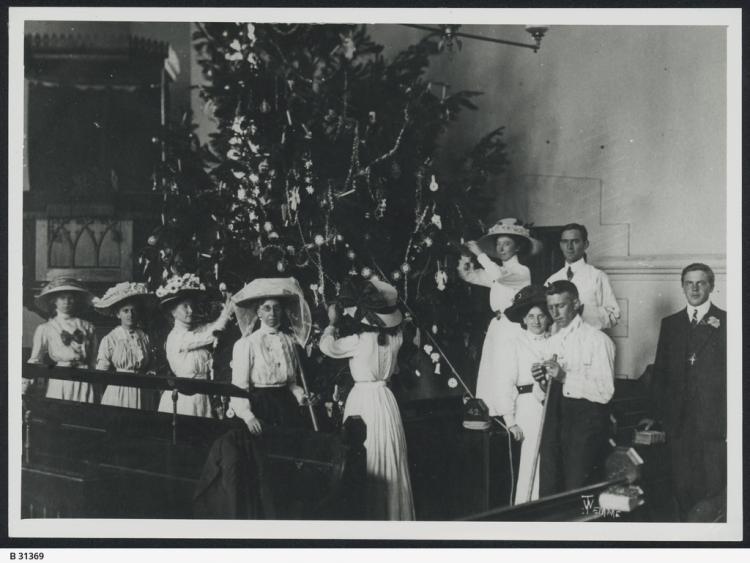 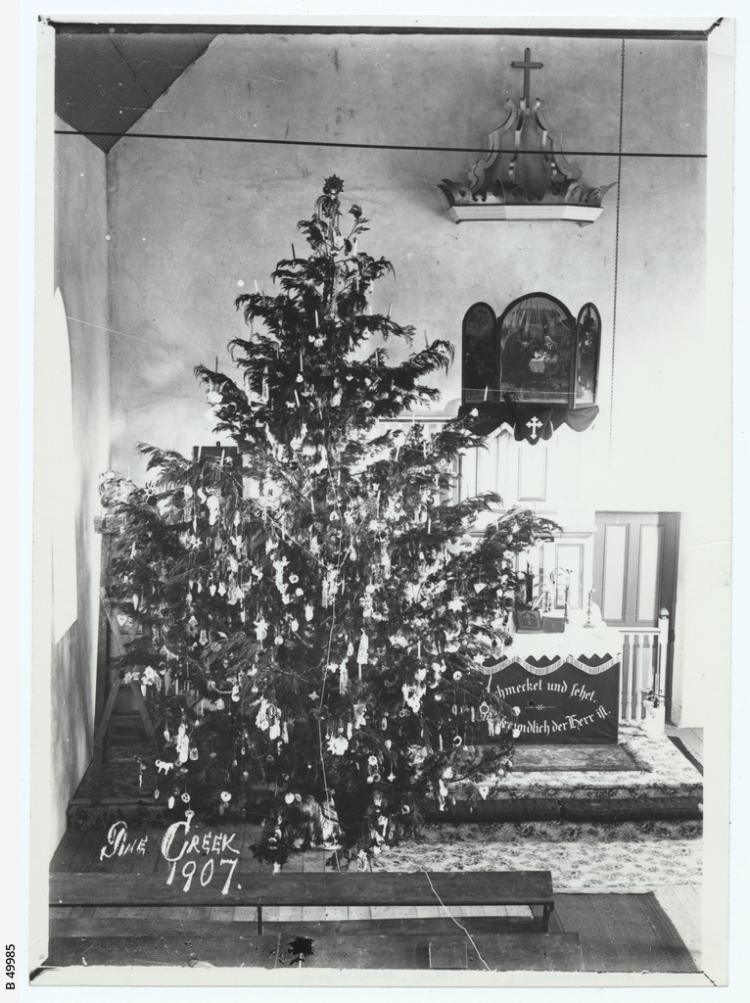 Children of soldiers photographed standing in front of a Christmas tree and Father Christmas during a party held at the Cheer-Up Hut in Adelaide, 1920.
SLSA: PRG 280/1/29/173 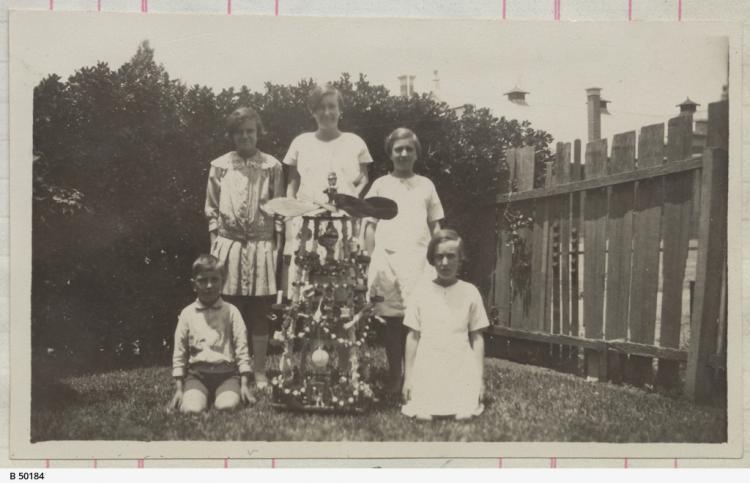 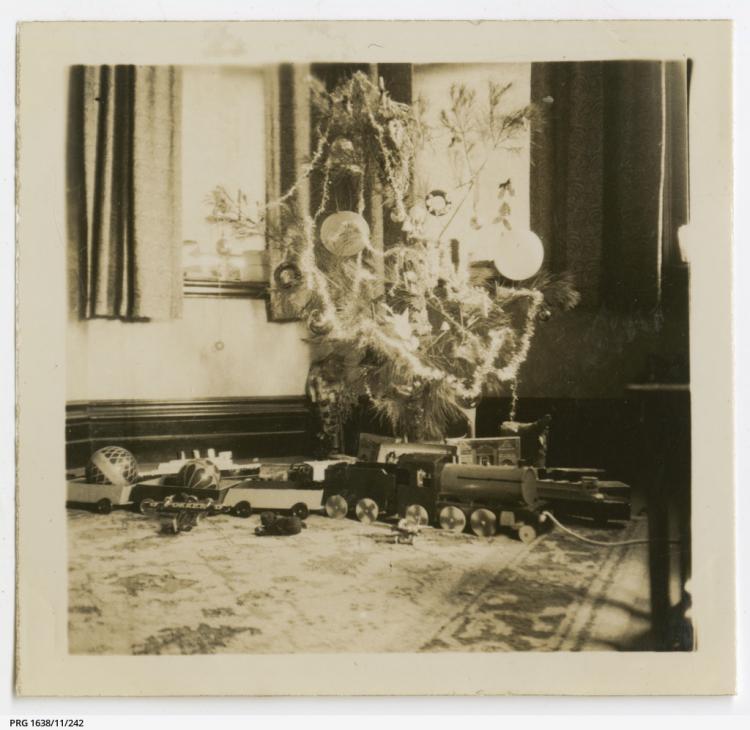 The evergreen fir trees have changed over time to reflect new inventions and marketing. Think plastic and metal as in these trees, the first from 1970, showing the stairs of Moore’s store (now the Sir Samuel Way Building on Victoria Square). The second image is a night view of a tree decorated
with lights, taken by Richard Woods in Victoria Square, December 2007. 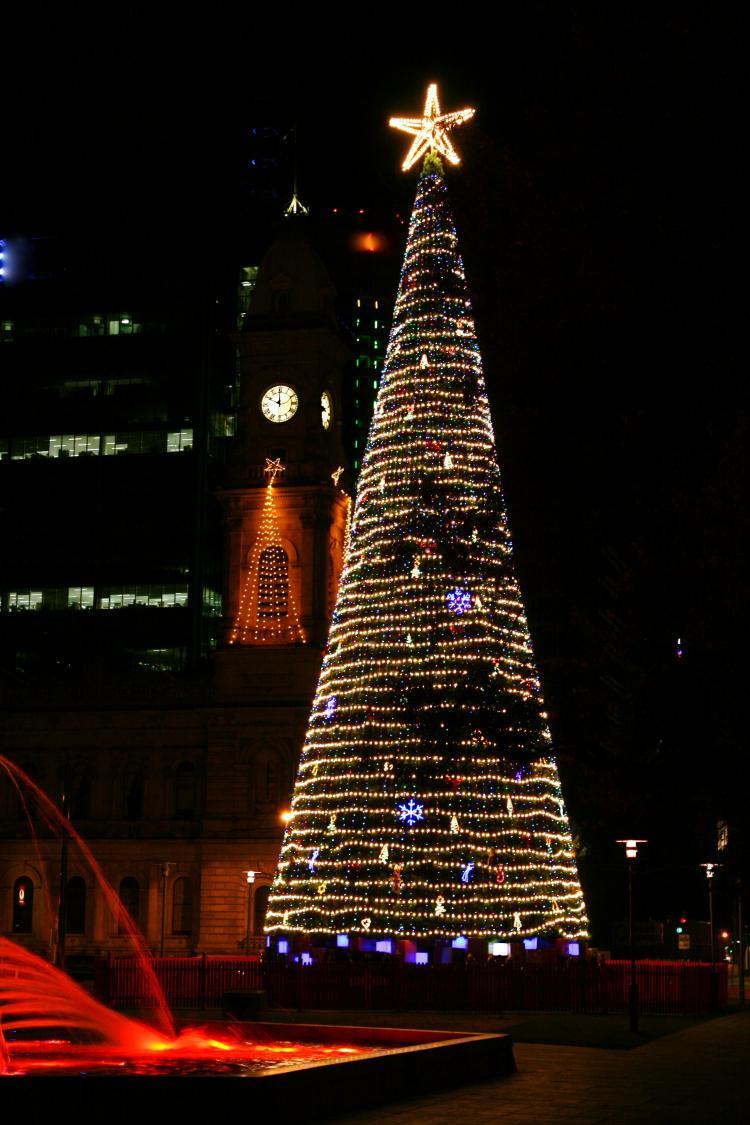 New fashions and customs have developed over time. Some people now decorate a bare branch to create a stick tree, which is cheap, ecologically sound and creative. Some homes feature a small potted tree which will later be planted in the garden and allowed to grow, at least for a time. 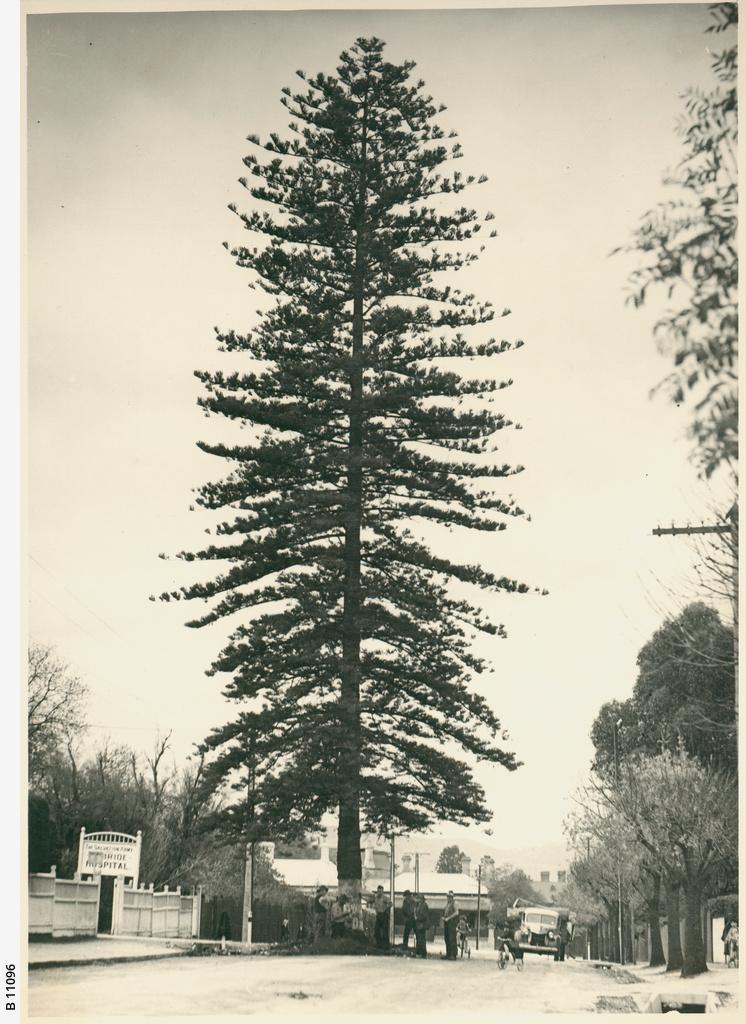 In the past few years a fashion for hanging Christmas trees upside down from the ceiling has emerged. The upside-town tree is supposed to save space in small homes and give shops more floor space for merchandise. This is not a new idea. According to legend, in the seventh century, St Boniface is said to have turned a fir tree upside down to teach the Holy Trinity to pagans after he chopped down one of their sacred oaks. Regardless of trends, and whatever their size and composition, Christmas trees continue to decorate homes and public spaces.  A beautiful Christmas tree seems to make people feel more cheerful. We see a lot of smiling faces around the Library’s Christmas tree, and it’s not just the children. Come visit the State Library’s Mortlock chamber to see for yourself. The tree is up until Sunday 9 January, 2022. 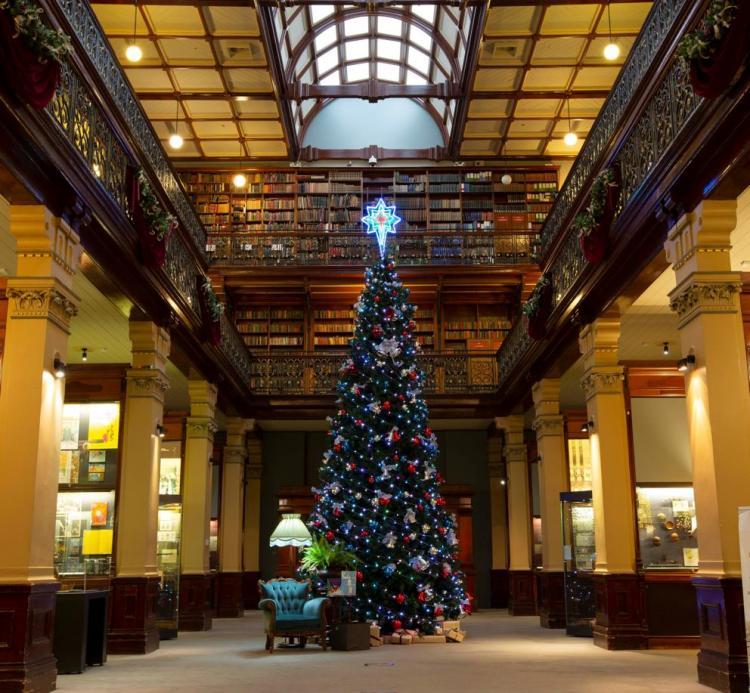