When it comes to inventors, South Australians punch well above their weight, however many of their achievements are largely unknown outside the state, let alone in the wider world.

For example, did you know that in Adelaide in 1934, brothers Donald and Edward Both designed an improved model electrocardiograph which was the world’s first instant diagnostic instrument? Or that in 1953, Donald Both designed the Humidicrib which has since saved thousands of babies' lives?

Together, the Both brothers also produced the first electro-encephalograph, as well as x-ray equipment, nerve stimulators, foetal heart-recorders, suction units, tomographs (which create a 2-dimensional image of a 3-dimensional object), defibrillators, cardioscopes (which let doctors look inside the heart of a patient), and blood transfusion equipment.

Portable incubator/humidicrib developed by the Both Brothers, circa 1950. SLSA: PRG 1776/2/6

An image featuring the Electroencephalograph, designed and developed by the Both Brothers. Image taken circa 1946. SLSA: PRG 1776/2/17 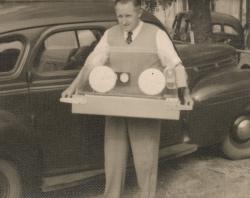 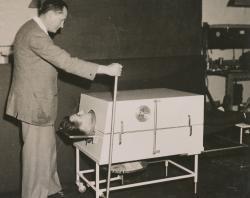 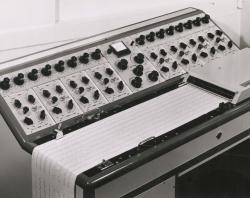 The brothers were born in Caltowie into an immigrant German family. In 1932 Ted, as Edward was known, started a company ‘E.T. Both’ and was joined by the youngest of his four siblings, Donald. Over the years they made significant contributions to medical equipment, with possibly their most innovative product being the Both Respirator - a wooden iron lung designed for the SA Health Department in response to the global poliomyelitis epidemic in 1937. There had been an earlier American version, but the Both design was simpler and cheaper to make – so much so that when the epidemic reached London, Ted Both moved there to help supply his version to all parts of Britain and what was then the British Empire. In 1940 Both was awarded an OBE for this work.

Nicknamed ‘The Edison of Australia’, some of Ted Both's other productions are well-known even though few know he was the man behind the product. These include:

Ted Both also developed a prototype electric scooter which had an electric motor and two batteries. The prototype in the photograph below is being ridden by Mrs Yvonne Both, wife of Don Both. Sadly, this was never put into production, but the 12-volt scooter was produced in 1941.

Among the records held at the State Library is a letter from the Department of Patents, written in 1941, denying the brothers a patent for the Visitel. It being wartime, the patent was rejected under provisions of the National Security Regulations with the rejection letter reading:

“A use to which the invention can be put, and to which it lends itself admirably, is for ‘spotting’ by aircraft flying over territory which it is desired to map or sketch in the essential points, the observer transmitting – by means of the aircraft’s radio - to a receiving station where the sketches would be immediately reproduced for observation."

Another letter held, written in 1966, is from Reg Grundy, the Channel 10 game show king. He puts in an order for scoring ‘light boxes’ which were intended to

"be recessed into the front of the long contestants’ desk".

All their apparatus was manufactured in the Adelaide workshop of Both Equipment Limited which was situated on the end of the western wing of the old Armoury and Mounted Police Barracks behind the SA Museum, before being relocated to Tavistock Street (now Frome Street) and later to King William Street in Kent Town. The original site has since been demolished.

Don stood for election for the Burnside Council in 1967 under the slogan 'Living in your own ward sharing your interests'. Edward Both married Lily Eileen Naughton in 1937 in Victoria, while Donald married Yvonne Watkins in 1939. Neither man had children. Edward died on 18 November 1987 in Mount Beauty, Victoria and Donald died on 1 September 2005 in South Australia.

Interesting additional fact - Ted and Don Both were also first cousins once removed of Otto and Joe Rau whose taxidermy work is highlighted in the Mortlock Wing of the State Library and can still be seen on display in the South Australian Museum. You might like to read more about the Tiger and the Taxidermists.

[Source: Graham Jaunay 'The Both Brothers'.]