Summer is traditionally holiday season, when we pack up and drive, sail, fly or ride the rails to catch up with family and friends or just get away from it all. For the past two years the pandemic has put a stop to most holiday journeys but most of Australia’s travel bans and restrictions are now lifting. Holidaymakers and tourists from faraway will soon be plying the oceans again or winging through the wild blue yonder. South Australia is once again open to visitors.

But spare a thought for yesterday’s South Aussies who had neither the means nor the money to take a summer holiday or any kind of holiday away. Until well into the nineteenth century most Australian workers worked six days a week. Tourism, that is travel just for the sake of seeing the world and taking in the view, was mostly for the well-to-do. Annual holiday leave hadn’t yet been invented.

a Promenade in the Gardens

So where did working South Australians go for a change of scenery in the nineteenth and early twentieth centuries? For most, only a very short break from workday life was possible, generally walking or hiking. For city dwellers anything more than walking distance from the city or growing suburbs required personal access to a horse, horse-drawn cart or carriage, or later, roads permitting, a bicycle. Public transport within Adelaide and its early residential offshoots was initially by horse tram or a limited number of train lines.

The Botanic Gardens opened to the public in October 1857. The 1910 postcard view below shows the avenue of plane trees along the northern rear side of the Botanical Gardens, planted in 1874. People can be seen enjoying the ambience of the area. A small zoo opened inside the Botanic Gardens in 1858 although the current Adelaide Zoo was not established until 1883. Botanic Park was established several years after the Gardens opened.

The Adelaide city area of the River Torrens was artificially transformed to fit a European aesthetic ideal in 1881 by building a weir and landscaping the surrounding area. The formal park provided a place to promenade and play, at least in the daytime.

Botanic Park showing the avenue of plane trees along the northern rear side of the Botanical Gardens. Many people can be seen enjoying the ambience of the area. The trees were planted in 1874, app 1910. SLSA: B 16393/38 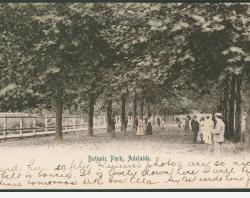 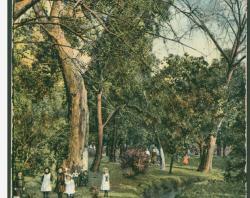 A Day at the Beach

Beaches were extremely popular summer destinations from the nineteenth century onwards.  Their popularity increased as the city and suburbs were connected by train and tram. Glenelg, Henley, Brighton and Semaphore were extremely popular. As public transport became established it became possible to travel greater distances for recreation and sightseeing. From 1878 (until 1914) there were horse-drawn trams, and from 1909, electric trams. Various rail lines had radiated out from Adelaide since the 1850s. Port Adelaide and Gawler were the earliest. The train was a convenient mode of travel although very uncomfortable. Beachside lines carried sightseers and holiday makers to popular destinations like Glenelg.

In this image from the 1890s passengers are seen boarding and alighting from a horse tram (from the Adelaide and Hindmarsh Tramway Company) on Seaview Road at Henley Beach. A sign on the tram is advertising 'Quaker oats'. In the background is the foreshore, beach and jetty upon which people are promenading. SLSA: B 14984

This image shows a crowd standing at the Glenelg to Adelaide terminus in King William Street in 1908, ready to board the train to Glenelg. The smoke billowing from the South Australian Railways 'P' class locomotive was the subject of continuous complaints and eventually, in 1914, the line was terminated at South Terrace. In 1929 the line was upgraded and electrified as the Glenelg tram line. SLSA: B 4397 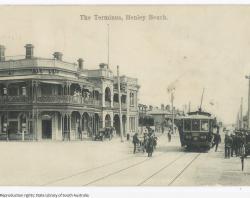 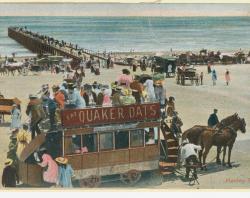 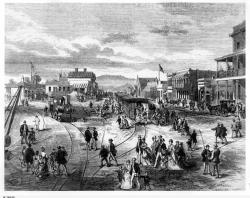 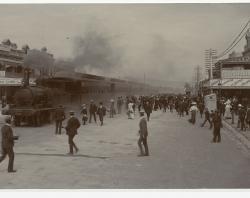 As professional photography became more widespread, views of beaches and other picturesque locations were turned into postcards, published as scenic views, placed in books and brochures, and later, newspapers, to attract visitors or celebrate an occasion.

The Colour tinted postcard above shows a view of buildings in Glenelg, taken from the Glenelg jetty. On the left is the Town Hall, in the centre is the Glenelg Coffee Palace, and on the right is the Pier Hotel. 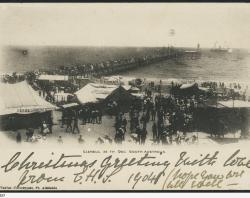 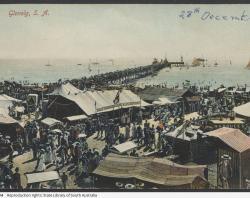 Not all the holiday activity was at Glenelg. This 1890 image shows holiday time at Semaphore. Large round tents have been erected on the beach. Horses and buggies are lined up along the foreshore. Children are paddling in the sea. Rides and swings can be seen above the tent tops.

Nearly thirty years later in 1918 a group of anglers is shown fishing near the Customs Office on Largs Bay jetty. A group of spectators watch a young boy inspecting his catch.

This beach and promenade scene at Henley Beach is part of a panorama taken by D Darien Smith and reproduced in the Chronicle on January 10th, 1925. In the foreground people are walking on the jetty while families relax on the beach. The Henley Kiosk, with its prominent twin lookout towers, opened in 1915. The rotunda can be seen in front of the kiosk with the Ramsgate Hotel behind.

This image forms the left-most section of a  beach and promenade panorama of Henley Beach,  taken by D Darien Smith and reproduced in the Chronicle on January 10th, 1925. SLSA: B 2413

This image forms the centre section of a  beach and promenade panorama of Henley Beach,  taken by D Darien Smith and reproduced in the Chronicle on January 10th, 1925. SLSA: B 2411

This image forms the right section of a  beach and promenade panorama of Henley Beach,  taken by D Darien Smith and reproduced in the Chronicle on January 10th, 1925. SLSA: B 2412 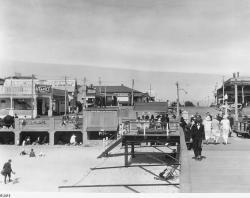 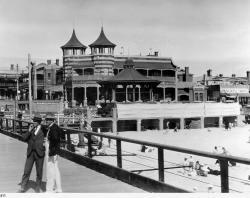 A picnic in the park

By 1909 the introduction of electric trams and the growth of suburban rail meant faster travel and longer leisure. Each weekend trains carried people out of the city. Sometimes as many as six trains ran the route to Belair. The day of the all-day picnic far from the city had arrived.

A group of 15 adults with two small children pose for the camera at the 'National Park Belair November 9th 1909'. This annotation on the back of the photograph is paraphrased with a later, typewritten version which reads 'Picnic day at National Park. November 1909'. There is no indication as to who the people in the photograph are. SLSA: B 70804 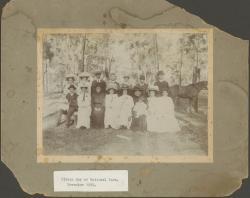 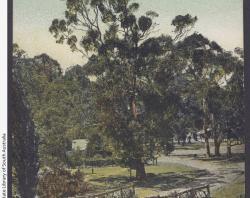 As the twentieth century progressed the expansion of rail and the introduction of an electric tram network networks led to a greater choice of  trips beyond the city. Pictured below is an early 1910 motor charabanc or bus outside the Tourist Bureau in King William Street. The Bureau led the way in using motorised vehicles for excursions. With the introduction of motor vehicles, roads improved. By 1910 , horse and carriage trips were being replaced by motor cars and guided charabancs tours.

Destinations further from Adelaide soon opened up as private operators realised that there was money to be made from tourism, especially in transport and accommodation.

Coastal steamers carried passengers to and from Perth, Melbourne, and Sydney. Steamers could be privately chartered but by 1910 regular local travel was in place. Small steamers travelled from Port Adelaide to towns along the coast. Destinations included Stansbury, Ceduna, Port Lincoln, Wallaroo, Port Pirie, Port Augusta, and Kangaroo Island. Aeroplane travel was out of reach for most but for those who could afford it, sea and river travel were early options. River travel for leisure became increasingly popular. The wood-fired river steamer Marion was one of the first paddle steamers to run cruises on the Murray River.

Posters, brochures, postcards, and newspaper articles advertised South Australia’s many desirable destinations to attract visitors from interstate and overseas. Tourism flourished and for a time,  any time really was holiday time.