Who was John S. Chappel

Chappel was a key South Australian architect, with his work covering a broad scope, from modest houses to corporate structures and apartment buildings. Some of these are still recognisable around the city today, such as the twin set of Park Lodge Apartments on South Terrace (see image below)

He matriculated in 1947 under the Post-War Reconstruction Scheme and completed a course in Architecture at the South Australian School of Mines 1948-1955. From 1956 to 1996 he was the principal of his own architectural practice, receiving many awards for designs of buildings, and from 1956 to 1990 was the architectural correspondent for the 'Advertiser' newspaper.

Photograph of the westernmost Park Lodge building of flats on South Terrace, designed by John S. Chappel Pty Ltd, architect. Showing view from the east side of the three story block of flats, and the glass frontage surrounding the staircase. 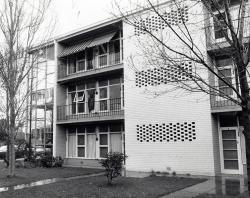 Update from the Chappel Archive Project

The project to date has seen two of our wonderful digitisation staff  scan almost 3000 photographic prints  into our digital repository, while myself and a small number of staff and volunteers have been steadily working on individual descriptive records to accompany the images. This work encompasses two series of photographs:

As I’m sure most Archivists would agree, one of the great joys of working in the field is working with the Collections, and the Chappel Collection is no exception. Looking through the photographs it’s not difficult to develop an appreciation of his  work, while looking at the photographs as a succinct collective whole allows space for a deeper appreciation and a recognition of patterns developed within his design principles  with many of the photos covering buildings of the 1950s, 1960s and 1970s, Chappel’s designs are not too dissimilar from the contemporary architectural works of today -  indeed many are decidedly ‘hip’ to be sure!

Quite a few South Australian residents would have grown up in a Chappel house, myself included. It is especially pleasing and interesting to recognise in the photographs some of the design features synonymous with his work, such as the brick breezewall design featured in the house he designed for Kym Bonython at Tennyson.

Chappel also designed updates to the property where Kym Bonython established Bonython Gallery in North Adelaide, along with his house in Leabrook, which of course housed so many fab artworks. 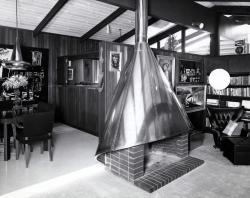 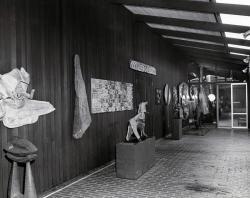 From there, the process of refining the descriptive spreadsheets begins , with more data added to further aid discovery and access, then loaded into our database system. These records will in turn create online access to the digitised versions of the photographs. Owing to the generosity of John Chappel, many people will now be able to access his life’s work, and another part of South Australia’s history.

Along with donating his actual working archive to the State Library, John also assigned copyright to the Libraries Board of South Australia, effectively allowing us to make his work available for the world to see  online.

In the news: Chappel designed office slated for demolition

A recent news story published in March 2021 by The Advertiser highlighted plans to demolish an office designed by John S. Chappel on Bagot Street in North Adelaide,  amidst calls to have the building heritage listed.

The following photos from our Chappel Collection were taken in 1965 of the then new office occupied by Keith W. Lange & Associates. The brick breezewall, a synonymous Chappel design feature, gives a clue to the building’s architectural provenance. The  Holden wagon sits parked out the front, and .it is interesting to note most of the cars in the Chappel photographs are Holden's. 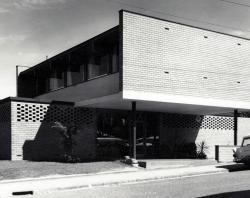 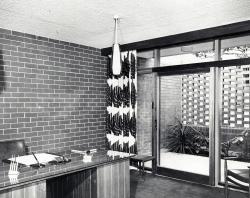 Stay tuned for more stories from the Archives.