The Cathedral robbed by policemen!

The Cathedral Hotel that is...

View the following extract as reported in The Advertiser, Thursday 17 October 1918, page 7.

'THE HOTEL BURGLARY
CONSTABLES BEFORE THE COURT
REMARKABLE ADMISSIONS.

At the Adelaide Police Court on Wednesday George H. Wyatt and John Farrar, police constables, were charged with having on October 4 burglariously entered the Scotch Thistle Hotel, North Adelaide, and stolen liquor valued at £14, and £22 in money, the property of Ethel May Opie, the licensee. The Bench was occupied by Messrs. R. G. Nesbit, S.M., F. G. Downs, and N. Opie. Sub-Inspector Beare prosecuted, and Mr. W. F. Owen defended.

Sub-Inspector Beare said unfortunately at the time the alleged offences were committed, the accused were members of the police force. They were not on duty, for one went off at 6 p.m. and the othter at 2 o'clock in the morning. The robbery occurred after 2 a.m. Mr. Opie, who managed the hotel for his wife, securely locked the doors and windows, except one window leading to the billiard-room. He put the till, containing the cash into the store-room near the dining-room. Next morning Constable Edwards was on duty, and tried the doors of the hotel between 1.30 and 2 o'clock and everything was right. Later, Mr. W. R. Scockley, tram night watch-man, noticed Constable Edwards, and subsequently saw a light in the bar-room.

Detectives Martin, Nation, Dedman, and Goldsworthy went to the defendants' houses and recovered property, some of which had been identified by the licensee. William Opie, husband of the licensee, stated that he identified one of the bottles produced by a word he had written on the label.

Dorothy Walloschick, sister of the licensee, said she found the store-room unlocked at 6.30 a.m. Everything was displaced there. The kitchen and billiard-room doors were open. Constable H. E. Edwards said there were no lights on the hotel between 1.30 and 1.45 a.m. He went off duty at 2 o'clock. William R. Scockley, tramway watch- man, said he saw lights in the hotel between 2 and 3 o'clock.

Detective Martin stated that at about 2 p.m on October 9, in company with Detectives Dedman and Goldsworthy, he interviewed Wyatt at the North Adelaide police-station. He mentioned that several robberies had occurred in the district, and that the police had good reason to believe that Wyatt had some of the stolen goods at his home. Wyatt said he was willing to allow the detectives to search his house at Wilson-street, Prospect. The wooden box produced was discovered in a room adjoining the dining room. Wyatt unlocked the case, which contained six bottles of spirits. Asked where the goods came from, he admitted that they were from the Scotch Thistle Hotel. He refused to say who was with him when he stole the liquor, adding, "I am mongrel enough for what I have done, but I can't settle one of my own mates." Other bottles of liquor were handed over to the officers.

At the Watch house he said the stolen money was in a box. A paper bag contained £14 10/ in notes and £2 16/6 in silver. He claimed that some of that money was his, being part of his wages. On October 10 the witness saw Farrar at the Watch house. He accompanied Detectives Noblet and Goldsworthy and visited a house in Tennyson-street, Medindie. A small box, nailed to the ledge of a window, contained a number of silver coins, Farrrar said Wyatt gave the money to him the previous day. Detective Noblet found a bag in the bathroom. It also contained money, which Farrar said Wyatt had handed him. He explained that they "went halves" in a pony and trap and Wyatt had paid £5 off his share. Farrar also said he got the liquor from Wyatt. The witness enquired whether he knew where Wyatt obtained the money and spirits, and he replied, "Yes, I knew it afterwards."The case was adjourned till tomorrow.'

The following are images of the Cathedral Hotel, formally know as the Scotch Thistle Hotel, located in North Adelaide.

On the south-east corner of Kermode Street and King William Road in North Adelaide the The Scotch Thistle Hotel was established originally on the north side of Kermode Street in 1850, the license was moved to the present location in 1881. Changed name to the Cathedral Hotel in 1925 and continues to trade under that name.

The Scotch Thistle Hotel is featured, in the foreground on the right, in this picture taken in approximately 1902 of North Adelaide view looking north east from St Peter's Cathedral [SLSA: PRG 631/2/302] 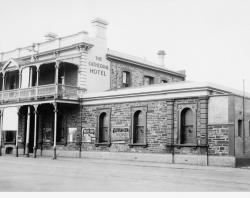 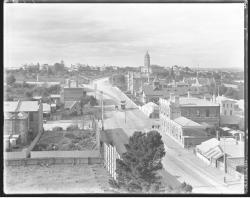