This year the theme of National Reconciliation Week is ‘Be brave. Make change.’ The State Library of South Australia has many personal records of people who have made a difference. Dr Charles Duguid, a pioneer in the reconciliation movement, is one of those people. His advocacy for Aboriginal people is reflected in his personal records collected by the State Library,  SLSA: PRG 387.

Duguid became a member of the Aborigines Protection Board when it was established through an amendment to the Act in 1939. He used his seven years on the committee to advocate for improvements to living conditions in housing and food supply on missions. Duguid investigated and strongly opposed episodes of cruelty or hostility from police and settlers, identifying deaths in custody to be an issue in need of government intervention and investigation more than 40 years before the Royal Commission into Aboriginal Deaths in Custody. He also passionately campaigned for self-determination and franchise (eligibility to vote). 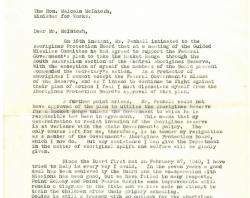 Duguid resigned from the Board in 1947 after the Protector (Penhall) supported the Commonwealth Government’s Rocket Range. Duguid planned to actively protest the Rocket Range and could not do that while serving on a government board that supported it. The protest movement against the rocket range included Pastor Doug Nicolls later appointed Governor of South Australia.

Duguid’s papers include copies of minutes of the Board's meeting minutes and reports on the conditions and significant events on missions and reserves. The records sometimes contain names of Aboriginal people mentioned in meetings or lists of residents living on missions, which can be useful for family history research.

There are also oral history interviews in the State Library recorded with both Charles Duguid SLSA: OH 32/8 and his wife Phyllis SLSA: OH 891/14.