It was an eventful afternoon in Adelaide one Thursday in October 1952. 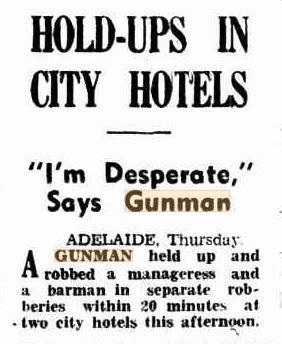 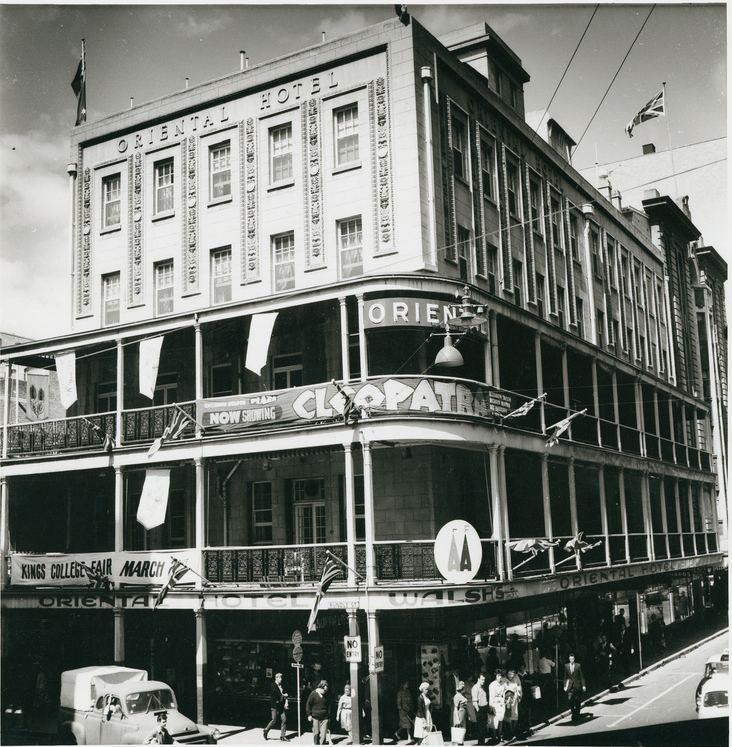 "GUNMAN ROBS CITY HOTELS
A gunman held up and robbed a manageress and a barman in different city hotels on Thursday afternoon.
Both robberies, which were committed with the utmost daring within 20 minutes, netted the gunman only about £27, although a large sum was missed in the second robbery. The first robbery occurred in the front underground bar of the Oriental Hotel. Rundle street, about 4.40 p.m., when the gunman held up James Harold Mills, 62, barman, of Port road, Albert Park. Keeping Mills covered the man went behind the bar, opened the till and grabbed the contents— £6 13/.

About 20 minutes later the gunman went to the booking office on the first floor of the Imperial Hotel, King William street, and held up the manageress, Mrs. Zelma Mary Cocks, who was alone. Before holding up Mrs. Cocks, the gunman asked for change of threepence, which Mrs. Cocks got by unlocking the safe. Grabbing cash amounting to about £10 from the safe, and keeping Mrs. Cocks covered, the gunman raced down the stairs into Grenfell street."
The Chronicle, Thursday 23 October 1952, p9

The Advertiser also reported on the crime:

Before holding up Mrs. Cocks, the gunman asked for change of threepence, which Mrs. Cocks got by unlocking the safe.
'When the man said, 'Give me ' those notes,' Mrs. Cocks looked up to see a revolver pointing at her.
As she screamed for help, the gunman said. 'Call out again and I will let you have it. It's got a silencer on it and I'm desperate.'
Grabbing cash amounting to about £10 from the safe, and keeping Mrs. Cocks covered, the gunman raced down the stairs into Grenfell street. As he ran away he almost knocked over Horrie Graham, a newspaper seller.
Both Mills and Mrs. Cocks described the-gunman as being about 21 years of age 5 ft. 6 in. tall, of sallow complexion with fair hair. He was wearing a blue suit with a white stripe. He was armed with a .32 calibre nickel plated revolver.
The Advertiser,  Friday 17 Oct 1952, p1 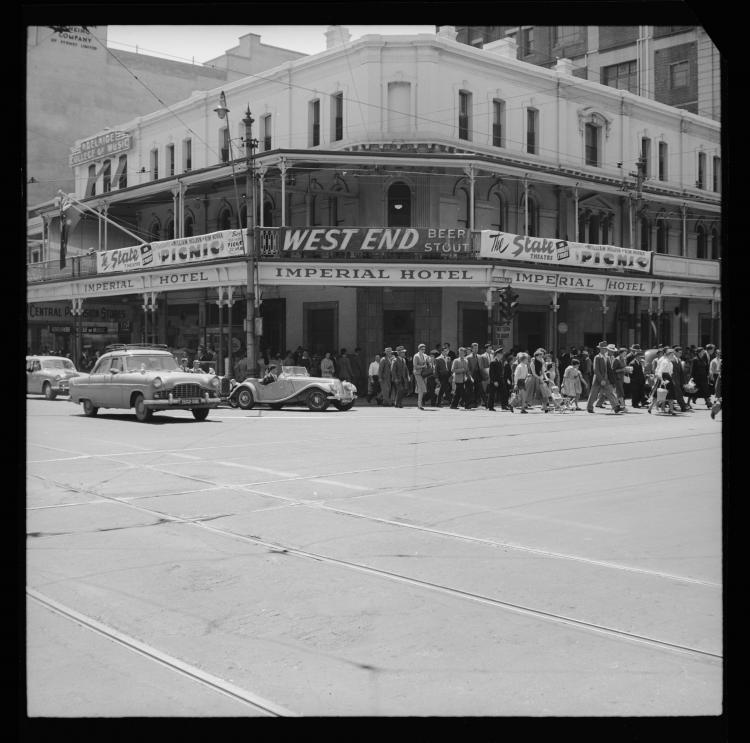 It looks like the perpetrator got away with it as no newspaper reported that anyone fronted court. It was suspected he fled interstate.

The Oriental Hotel was established as the Suffolk Inn in 1840 and it had a number of other names during its life as a licensed premises, including the Saracen's Head and the Hamburg Hotel 1847-1915. The name was changed to the Oriental in 1915 due to anti-German sentiment and continued to trade under that name until 1966. 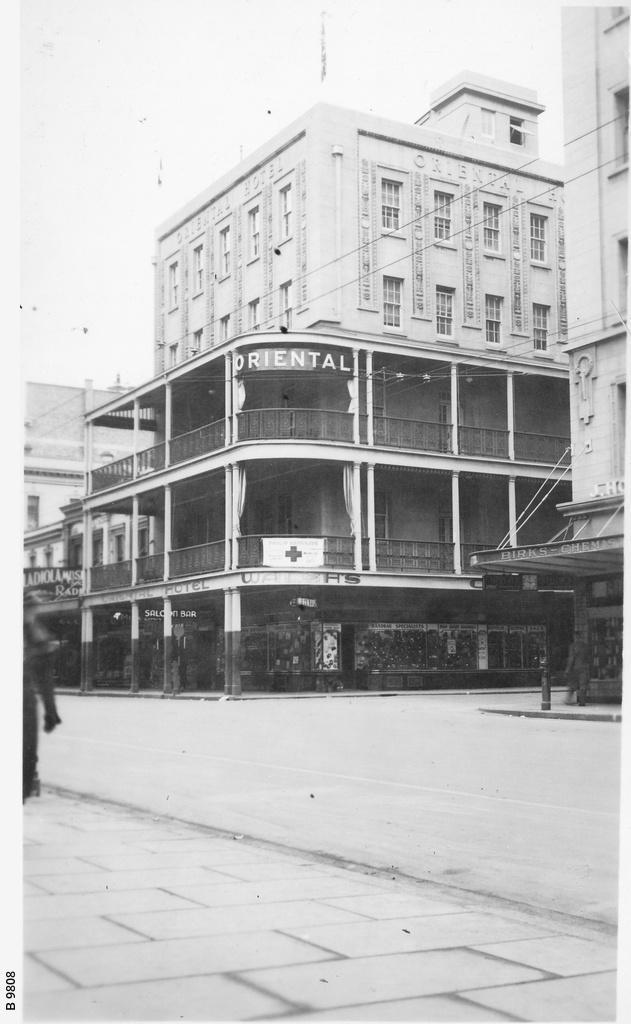 The Imperial Hotel was established in 1869 as Hann's Hotel, and changed its name to the Imperial in 1871. Demolished in 1960. 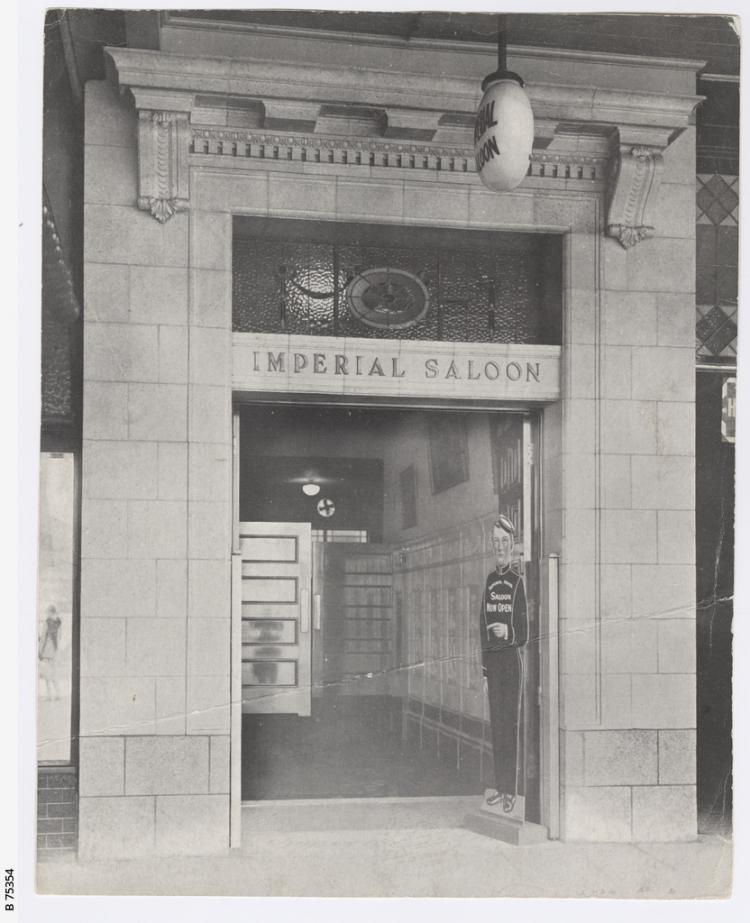 View of the saloon entrance of the Imperial Hotel, c1925. This entrance was built by Wunderlich Ltd in Art Deco style. SLSA: B 75354