The story of the founding of the State Library begins in the 1830s in London, where Robert Gouger was lobbying the British Government to found a new colony which would be known as South Australia.

In December 1833 he formed the South Australian Association in order to secure a charter to found a colony, and the Association attracted many prospective colonists enticed by the potential advantages of early land purchase in this new colony.

The South Australia Act was passed on 14 August 1834 and by 29 August, Gouger’s enthusiastic outlook had seen him form the South Australian Literary and Scientific Association with the aim to 'cultivate and diffuse useful knowledge throughout the colony'. Members of the Association donated books which became the basis for the colony’s library—Robert Gouger’s own contribution was 95 volumes.

In recognition of his capable administrative skills and his critical role in the forming of the colony, Robert was appointed Colonial Secretary of South Australia, and, with wife Harriet, sailed for South Australia on 30 June 1836 on board the Africaine. Of note, also on board was Robert Thomas, publisher of the first South Australian newspaper and the artist John Skipper. The Africaine arrived at Holdfast Bay on 26 November 1836.

Robert Gouger’s passion for books and education is shown by an entry in his diary on the first day of sailing:

’I distributed … amongst the passengers and sailors some books supplied by friends for the use of the ship during the voyage–afterwards to be given to some public institution. On conversing with some of the labouring emigrants, I find they are desirous of establishing a school on board for the instruction of some of the party who are not able to read’.

The books destined to become the colony’s library were packed into a tin-lined iron trunk and other boxes which on board the Tam O’Shanter, arriving in South Australia a month after the Africaine on 18 December 1836. Interestingly the Tam O’Shanter’s cargo also contained the constitution of the new colony.

Light's passage is located in the top left area of the plan of the harbour of Port Adelaide, South Australia including the New Port as proposed by His Excellency the Governor and Commissioner, showing the property of the South Australian Company / nautical survey by William Light Esquire [SLSA: C 1076]

Extract from page 1 of Robert Gouger’s diary  ‘Some Rough Notes of a Voyage from Gravesend to South Australia in the Africaine’  [SLSA: PRG 1012/1] 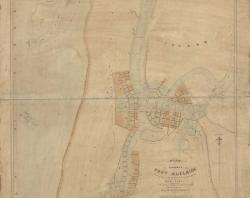 Unfortunately, on arrival in South Australia the Tam O’Shanter was grounded on a sandbar in Light’s Passage (near Outer Harbor) for several days, where sea water got into the ship and damaged some of the books. They were unloaded on to the wharf without being dried out so it is amazing any survived.

The books had an eventful life after they arrived in South Australia, moving to various locations around Adelaide, but they are now safely preserved as the Gouger Collection and are on display in the Mortlock Wing of the State Library.

‘Earnest, persistent and practical, Gouger had a pleasant manner and a persuasive tongue, but he was inclined to exaggerate … the virtues of South Australia. With his youthful looks and boyish ardour he was often thought to be brash and reckless, yet he was South Australia's most devoted promoter.’

Former State Library staff member Dr Michael Talbot’s research has enabled him to reconstruct The Library of the South Australian Literary and Scientific Association of around 600 volumes.