The biggest changes brought about by the completion of the Overland Telegraph were within the newspaper industry.

The ability to receive almost instantaneous news from the other side of the globe and print it in the morning newspaper, changed journalism and the habits of newspaper readers, and dramatically changed the costs of publishing newspapers.

The 3,000-kilometre line running north out of Adelaide to Darwin, travelled by a submarine cable to Java, and linked with a telegraph line running through India and Europe directly to London. The place which, for most nineteenth-century South Australian residents, was the centre of civilisation. Britain and all things British, from Queen Victoria downwards, ruled not only ‘the waves’ (in the words of ‘Rule Britannia’) but also ruled fashion, philosophy, literature, the arts, science, and even sport.

Popular mythology claimed that the first report received in Adelaide via the Overland Telegraph Line (and printed in the newspapers of the day) gave the English cricket results. This is not true – although it might have been if the Line had been completed on schedule.

On 21 October 1872 the first telegraph message received in Adelaide via the Overland Telegraph Line caused flags to be flown and bells to be rung. It was a congratulatory telegraph to the Mayor of Adelaide (A.H.F. Bartels) from the Lord Mayor of London, received just seven hours after it had been sent.

You can read the full article titled Adelaide and London Telegraph in full via Trove. The South Australian Advertiser, 21 October 1872, page 3. 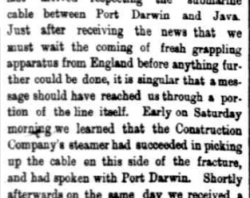 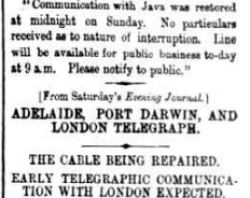 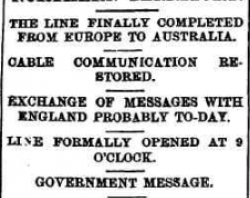 Two days later, on the 23 October, Adelaide’s Register newspaper contained a new headline ‘English news twenty-four hours old’. The Register’s rival, the Advertiser contained a shorter version of the same telegraphic headlines on page 2. The new telegraphic news was not unlike today’s news of royals, American presidents and religious controversies. Eager Adelaide readers were informed that the latest emperor of France had been forced to flee to England, President Grant had been re-elected in the USA and the Church of England was threatening a split in Bristol.

This is a photograph of page 5 in the South Australian Register (Adelaide, SA) Monday 21 October 1872. You can view the page in full via Trove.

You can read the title 'Adelaide and London Telegraph' in full via Trove. The South Australian Advertiser (Adelaide, SA) Monday 23 October 1872, page 2. 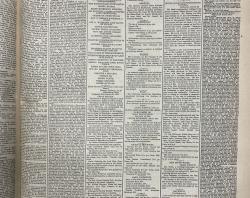 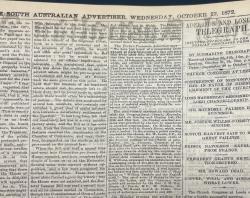 Due to the placement of the Overland Telegraph Line with its culminating receiver station in Adelaide, we were in the incredibly fortunate position of being the Australian city where the world’s news was received first.

Because the long saga of the building of the line, with all its delays, had cost far more than the tiny South Australian Parliament could afford, the cost was financed by a loan from the world’s (then) greatest multi-national corporation – the Eastern Extension Telegraph Company. Taking twenty years to pay off the debt – quite a feat in itself – the US-based Company jealously fought off all forms of competition. (Thereby preserving the Company’s investment.) Each of the major newspapers of the other Australian capitals placed journalists in Adelaide to ensure they received overseas news telegraphed to them as quickly as possible.

Telegraphic news was expensive, with £9 – or a month’s wage for a labourer - buying just 20 words. The best approach was to form inter-newspaper alliances to share the costs. So the Adelaide Register combined with the Melbourne Argus and the Sydney Morning Herald, paying upwards of £8,000 per year to collectively receive telegraphic news reports. Agencies such as Reuters had been established in the 1850s to gather and re-distribute news by telegraph – these reports had appeared occasionally in the Adelaide newspapers from that time but with the completion of the Overland Telegraph Line now appeared daily.

It was a wonderful new world of news reporting and reading for the newspaper owners and the newspaper readers of South Australia. But it also finally ended the days of idealistic news gathering and printing as newspapers were forced to become increasingly commercial enterprises in order to cope with the massive costs of the new technology.