We’ve recreated this striking cut-out model builder booklet so you can build your own bomber squadron base and experience what it would have been like to play as a child during World War II. Here are some examples of the front and back model cut outs that you can print and make yourself. 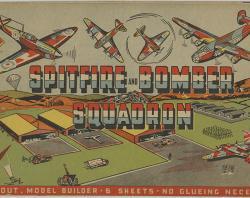 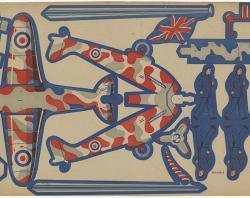 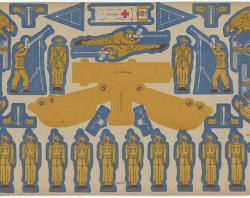 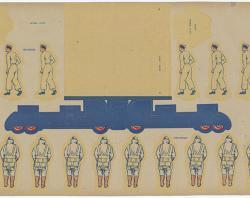 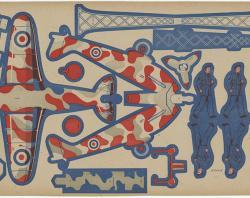 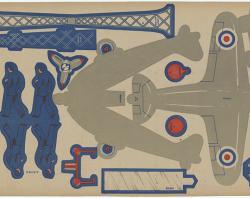 Many families were facing financial hardship during the early 1940s so toys like this were considered a luxury item. It would also have been a popular wartime toy as it didn’t require glue or sticky tape, both of which were in short supply due to rationing, like many common household items.

Coloured ink was also rationed during the war but was made available to print items such as this model book as they were often sold to raise money for the war effort.

It was printed on low-grade cardboard, which was typical of this kind of publishing in wartime Australia, with patriotic jigsaw puzzles such as United in Victory, a jigsaw puzzle featuring American President Franklin D Roosevelt and Australian Prime Minister John Curtin, also using this type of material.

In addition to raising money, these toys were also designed to accustom people to the construction of air bases used for training here in Australia, and to help them imagine those used by the servicemen sent overseas.

Children who lived near such bases came to know the sounds of the different aircraft and sometimes even met the men who flew them.

Few intact copies of this booklet have survived as it was designed to be pulled apart and made up into models but we’ve recreated the booklet and offer it as an activity you can download and print.

Why not share your creations with us? Tag us in your social media posts #slsa