Valerie was busy tidying her things and had to decide what she would do with Keifee the koala, her treasured childhood toy. Three generations of Valerie’s family had played with Keiffee since the 1940s and she now wanted to find a place where he would be looked after properly and be available for others to see and enjoy.

Valerie recalls the halcyon days of her wartime childhood living in a large house in Victoria and running about the grounds with all her cousins. Whilst the men of the family were away on war service, her mother, Nanna and all the Aunties banded together in one household to look after the kids and each other. She said that after the war,

“A toy koala [was] given to me by my father [Keith] on his return from World War II stationed in Darwin. He returned home to Hamilton, Victoria via Adelaide. It was in Adelaide that he purchased the koala as a birthday gift for me on my 3rd birthday. I remember my birthday vividly and being thrilled to be given a koala, one of my favourite Australian animals. On my actual birthday my mother dressed me in my new party dress complete with my 'Shirley Temple' curls…posing me on the piano stool with my gift for a snapshot.”

Keiffee was named after Valerie’s father, Keith Allan, as that’s how she pronounced his name as a young child. Only recently her younger brother reminded her that the koala has a name. As her brother was still a baby and not much use to play with, Keiffee became Valerie’s constant companion. He was wheeled about in a metal pram, wrapped in a blanket to go to sleep and at night slipped under Valerie’s bedcovers to keep her company.

Valerie holding Keiffee for her birthday photograph, they are almost the same size as each other. SLSA: B 78539 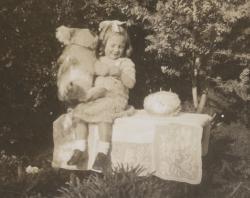 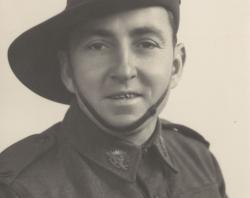 Valerie wondered why Keiffee smelled funny and her Dad explained that was because he was made of animal fur and straw. She was beguiled by his dark, smooth leather nose. Keiffee was always hidden on top of her Mum’s bedroom wardrobe if they knew rougher cousins were going to visit.

When Valerie was ten her family moved to Adelaide, living in various suburbs. Keiffee was carefully packed for each move and then stowed away during Valerie’s teenage years, in a pillowcase with lavender sprigs to ward off the moths. When Valerie’s sons were born in the 1960s Keiffee was brought out of storage for them to play with. She noticed that they played with him in a different way to how she played. Valerie recalled,

“He was put in the back of a peddle car and whizzed around the garden or in a basket on a three wheeled tricycle, then seated on a cane chair in the sunroom until the next adventure.”

As her boys became adults Keiffee was stored away again for another twenty years until the arrival of her granddaughters in the 1990s. They played with him when they stayed with her after school or in the holidays and in a different way to her children. Valerie said,

“By that time koala was a bit worse for wear! His ears were not as fluffy and his claws bent. This made no difference to the girls and they lined him up with their own soft toys to enjoy a tea party or picnic on the lawn in my garden.”

What to do with Keiffee?

The Children’s Literature Research Collection at the State Library cares for many hundreds of historical toys played with and donated by members of the South Australian community. Valerie had seen an article about the toys component of the Collection and enquired with the curator. At the library we know that such precious family belongings are handed over with a pang of sentimentality so it is important for people to meet the curator and be reassured of the care the toy will receive. Once we met Keiffee we knew he would be as relevant to the state’s heritage as any other object. His story represents the history of local childhood, an Australiana aspect to post-WWII toys and intergenerational play distinguished by era and gender. Of course we would take him.

Hard living had taken its toll

When Keiffee arrived at the library his legs were bent at strange angles, his scarf was skew and his stuffing was coming out of his ears! Also, he looked like he could be carrying an insect or two which cause trouble for fragile historical collections. Still, he appeared to be smiling so we pressed on with his rejuvenation to ensure he would be treated, restored and available for other people to see, just like Valerie’s family had hoped.

Keiffee gets an extreme makeover and body sculpting

We arranged for Keiffee to meet with expert Objects Conservator Megan Sypek at Artlab, a Government agency which provides expert services for the preservation, care and management of the state’s cultural collections. Megan said,

“When the koala came to our conservation lab he was clearly a much-loved toy. His life had left him slightly squashed out of shape, he had a torn ear and failing seams combined with several bald areas.”

Oh. Harsh. It could happen to anyone.

Megan’s priority was to deal with any pest infestations. As Keiffee was most likely fabricated from kangaroo hide which is on the menu for protein eating pests like carpet beetle, he needed to be sealed into a bag and frozen for several weeks to kill any pest eggs. The indignity!

After chillin’ in the freezer Megan brush-vacuumed Keiffee to remove surface dust. His twisted body had been filled with wood shavings which had moved into the wrong areas, and Megan had to decide how to approach this. She said,

"I addressed his misshaped body with some judicious massage to manipulate the filling better. Once his shape had been addressed the failing seams and torn ear were carefully resewn with a curved needle.”

Next Keiffee needed a custom storage box to maintain the good shape and position of his arms and legs. As a finishing touch his scarf was tied in a haughty fashion and his portrait done. Keiffee was ready to greet the world once again and start a new career after his initial retirement. 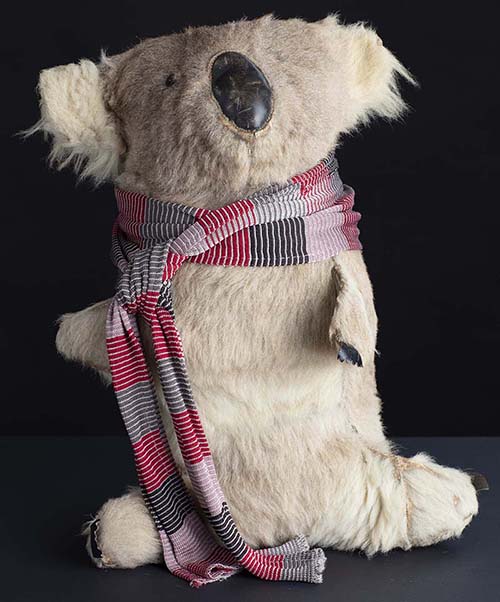 “Keiffee has been played with and loved by three generations of children in our family. Like me, my family wish koala to be cared for and admired by other children. That is why we are all happy to donate him to the library for others to know how precious he was to us all."

And indeed Keiffee is already engaging today’s children through our online education programs and visits. Teachers have told us of the reaction from children when they are told his history, and how a lady who was a child in the late 1940s loved him so much. During 2021 school terms Keiffee will be seen and discussed in A Playful Past Online, a free, COVID-safe online program presented for early learners by the State Library. It is not unprecedented for curators to invest their emotions in pieces they work with so closely, especially when they know how important they are to people’s families and memories. We thank Valerie and her family for recognising that a collecting institution like the State Library is the right place for their loved childhood companion and for trusting us with his repair, care and promotion of him to the South Australian community and those in cyberspace, through our Digital Collections.