There has just been erected in the Museum, North-terrace, a large and handsome clock, the workmanship of Messrs. E. Dent and Co., of London. The order for the clock was given by Mr C. Todd, C.M.G., Postmaster-General, during his recent visit to London ... The makers ... state that they were actually out of pocket by the transaction, but they wished to turn out the work in a really creditable manner.

Back in 1887, the then three-year-old Mortlock wing (as we now know it) held the Museum, Art Gallery and the Library, all in the one building. Built as an extension to the original 1859 Institute Building, which was also home to all three organisations, the Mortlock Chamber was divided by an elaborate metal grill with the Museum at the northern end and the Library at the southern end. The two large rooms overlooking North Terrace were crammed with early holdings of the Art Gallery. In 1889 the Art Gallery moved to the Exhibition Building, and in 1895 the Museum moved into the 'temporary' red brick building in which it still resides.

The clock remained as the Library expanded to fill the space and still ticks grandly above the Library's main exhibition area. It is an eight day clock, so is wound weekly with its original winder - a small brass crank. In an unusual feature, when wound the clock maintains power. This means that the pendulum does not need to be interrupted during winding (most mechanical pendulum-driven clocks must be stopped for winding). It also contains a 'deadbeat' escapement, meaning that the hands do not recoil and thus cause undue wear to the mechanism. This also ensures greater accuracy. The beautiful brass works are a pleasure to set, responding to the lightest touch. 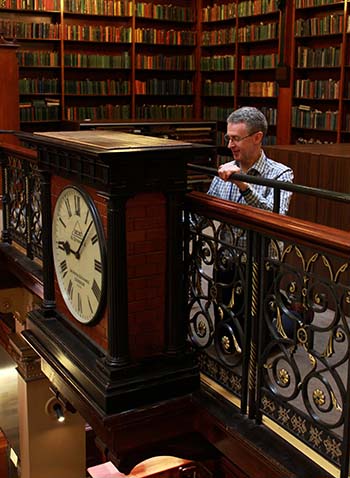 The clock-face in its ebony and wooden frame measures 63cm across the dial and the pendulum is about 43cm in length. However, the actual mechanism is a compact 18cm2.

Every so often the clock needs to be cleaned and oiled. I believe its last major overhaul was in 1999 during the Mortlock earthquake mediation works. Recently the clock has stopped and it is currently under the care of the city's heritage clock handler. Hopefully, it should be ticking away again by Christmas - as it has done for the past 130 years.