Augustus Short (1802-1883) was consecrated in Westminster Abbey on 29 June (St Peter's Day) 1847 as the first Anglican Bishop of Adelaide. Two months later he set sail for Adelaide on board the Derwent with his wife Millicent, their five children, and an entourage of at least two governesses, four servants, and three clergymen who had volunteered to come to the colony with him. Augustus Short was installed as Bishop of Adelaide in a service in the colony's oldest church, Holy Trinity, on 28 December 1847 - the 11th anniversary of the proclamation of the colony.

Initially the Shorts lived with Governor Robe and family at Government House, while the children and servants were in rented accommodation at Kensington. The heat of an Adelaide summer was a new experience for them all, and a beach house at the Bay (Glenelg) was also used. In 1851 the family moved to the house the Bishop designed himself in the cooler climes of Beaumont. It was first called Claremont Cottage but later re-named Beaumont House and today is the headquarters of the National Trust in South Australia.

Augustus Short's entry in the Australian Dictionary of Biography describes him as a High Churchman who clashed frequently with his predominantly Evangelical (Low Church) flock, as well as the colony's predominant Nonconformist population. However, on the positive side, Short took a strong interest in the Aboriginal population, and with Archdeacon Matthew Hale established Poonindie Mission near Port Lincoln. He was passionate about education, becoming the first Vice-Chancellor of the Adelaide University, and purchasing land to establish St Peter's College. His Wikipedia entry describes him as a fine scholar, thoughtful preacher, good businessman and an excellent administrator who could deal with church matters with firmness, wisdom and discretion. On his retirement in 1881, the Bishop, with his wife and daughter Isabella, returned to England where he died at Eastbourne in 1883.

The Library received the two metres of the Short family archive in 1966, which is now Personal Record Group 160. A highlight of the papers are Bishop Short's personal diaries for the years 1834, 1847-48, 1852-59 and 1867-69. The Library has selected the diary which begins at the start of his voyage to South Australia in September 1847 up to October 1848 for transcribing. This work was done by our longstanding 96-year-old volunteer Ernest Roe.

From Ernest's long hours spent with the Bishop, he comments:

"The most striking feature of the diary, particularly on the voyage out, is the frequency of references to illness. Very matter-of-fact. There are also occasional references (with a hint of surprise) to someone being well! The staccato style in which the diary is written leaves little scope for emotional content. Nevertheless he is much aware of various kinds of beauty. The huge variety of matters of which he seems obliged to take note, indicates that he is most conscientious and hard-working. Inevitably the Bishop's role was, I suppose, highly judgemental. One cannot imagine him having any doubt on any matter with moral connotations. In general he seems a kindly, caring person, although the diary's content pursues nothing in detail." 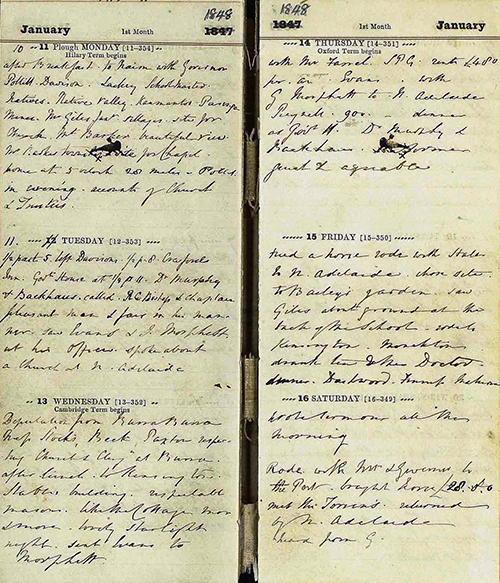 The diaries are small books, the writing is very difficult, and the brief entries clearly serve simply as aide-mémoire - words separated by dashes or spaces - and the few verbs make it difficult to divine what is going on. For example: Adding value to Ernest's transcript, and taking almost as long as the transcription itself, volunteer Kathy Hurley researched the diary. She managed to identify most of the people and places named, and to shed light on events so tantalisingly and briefly mentioned. Sometimes her footnotes occupy half the page. The diary starts on board ship and the Bishop soon gets to grips with shipboard life and makes accurate observations of life at sea:

The Derwent arrived at Port Adelaide on 28 December 1847 and Bishop Short immediately set to work - and did not rein in his diary comments. He described one committee as 'on the whole ticklish people to deal with'. One individual, he found 'too grasping by half,' others are 'boisterous' or 'bumptious'. Whatever his faults, Short was admired for his energy. From the time he arrived in South Australia he was seldom out of the saddle - literally and figuratively. He was well known for his horsemanship and covered most of the state, camping out as he travelled between settlements. He seems to have known everybody of note - as Anglican Bishop, in the social climate of the time, he was on a level with the Governor.

Church business was also a commercial business. For example, an entry for 12 January 1848 refers to a Deputation from Burra Burra Messrs Stocks, Beck, Paxton respecting Church and Clergyman at Burra, prompting a long footnote which describes rival companies known as the Nobs and the Snobs who had competed to lay claim to the copper deposits at Burra in 1845. Later in March he visits another mine, which footnotes 138 says is known as Tungkillo / Kitticoola / Great Wheal Orford / Reedy Creek mine, which was a copper and gold discovery of 1846.

left Mine at 9. to Bakers. Mr B went to the Paringa on with Anstey. wild cheers odd good, unbelieving. horse tripped badly. Ansteys at 5 Mrs A. pleasing. Image caption: Carving of Bishop Short in the archway on the southern side of the nave of St Peter's Cathedral,North Adelaide 2006 [B 69998]. Image courtesy Toby Woolley.

From the beginning Augustus Short felt that a Bishop needed a cathedral. His diary entry of 2 January 1848 included a memo to self about this need, and by 4 March he recorded that a site had been procured.

Up before 7. Walked in garden with Anstey to Kensington fruit from Higher Combe. Henry poorish Mr Hawker called and Doctor. Henry better at night. Site of Cathedral secured140

But Kathy's footnote 140 describes another very Adelaide story, "Bishop Short obtained a land grant in Victoria Square from Governor Robe as a site for a cathedral. But shortly thereafter the legality of the grant began to be publicly questioned. It was argued that the area was a public reserve and a Supreme Court judgment in June 1855 confirmed that the grant was invalid and construction could not proceed. In 1862 Bishop Short purchased the remainder of the town acre at the corner of King William Road and Pennington Terrace at North Adelaide on which the Quaker Meeting House stands and, in June 1869, the foundation stone was laid of what would become St Peter's Cathedral."

It would be interesting to transcribe the rest of the diaries, but for now, dip into the 1847-48 diary anywhere to get a feel for the life and times of the phenomenon that was Bishop Augustus Short during the early years of the colony of South Australia.