In October 1880, the S.S. Ferret is chartered in Glasgow by several men desiring to take a Mediterranean pleasure cruise. Built in Glasgow originally for use as a River Clyde ferry, the 460 ton steam ship will become the centre of a notorious marine conspiracy case.

James Henderson, alias Smith and numerous other false identities, is the leader. Posing as a wealthy businessman and relative of the First Lord of the Admiralty, he obtains a lease for the steamer. The gang of fraudsters purchase wine worth five hundred pounds and quickly recruit new ships’ officers and crew. They head first for Cardiff to pick up Henderson’s wife and some more cargo.

Over the next few months the steamship voyages to the Cape Verde Islands, Brazil and South Africa, ending up in Melbourne. Along the way her name is changed twice, eventually becoming the then India after repainting and remodelling.

In April 1881, in Queenscliff Victoria, a recently arrived Scottish wharf police officer named James Davidson is reading a newspaper from home. It carries an article about a Glasgow steamship which has mysteriously disappeared. Coincidentally, Constable Davidson looks up to see the India in the harbour and notes a strong resemblance to the missing Ferret. After some nifty police work, and several escape attempts, the three chief culprits are caught, tried and convicted.

Reclaiming its name, the Ferret becomes part of the Adelaide Steamship company, carrying cargo and passengers on the weekly Port Adelaide – Spencer Gulf route. In 1904 just off Reef Head on Yorke Peninsula, the Ferret encounters a stricken Norwegian barque, the Ethel, which it cannot reach but immediately reports. Help arrives quickly. A young sailor from the Ethel has drowned trying to swim a lifeline to shore but the rest survive. The Ethel breaks up during salvage attempts and lies wrecked on the beach. 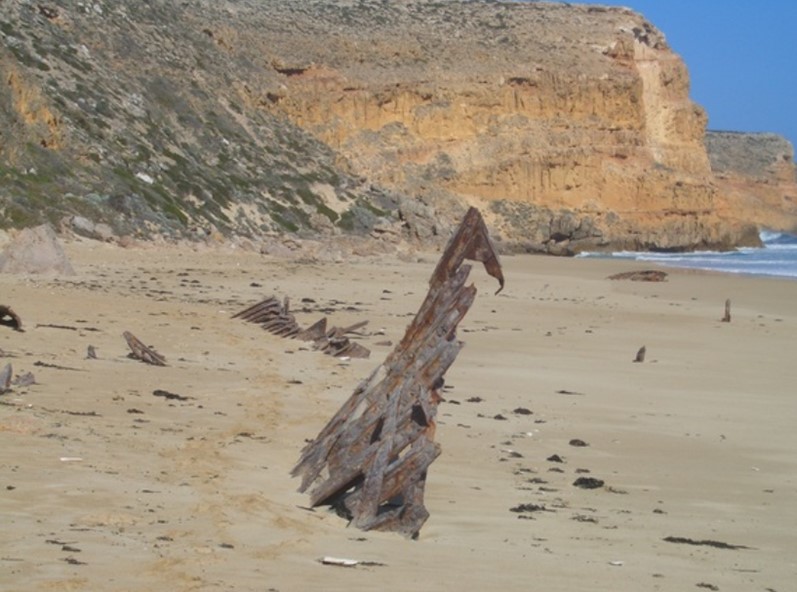 Image: A piece of metal from the wreck of the 'Ethel' lying in the sand on the coast of Yorke Peninsula and Innes National Park, September 2007. Photographer, Mark Gilbert. SLSA: B 71296

Forward to 2am on Sunday 14 November 1920. The S.S. Ferret is following her normal route when she runs into sudden thick fog and heavy seas. The ship is quickly battered and holed. The crew must abandon ship but first need to get a strong rope to the beach. Their anchor point? The wreck of the Ethel, the ship encountered 16 years previously. Is it coincidence, providence or great good fortune? Who knows? But the crew secure a lifeline, reach shore and walk to safety. A century later, the remains of the two shipwrecks lie on the sand just metres apart.