For a long time, a large brown envelope with a crayoned inscription lay in the back of the special collection’s stacks. The inscription read, ‘Nelson letter’. Inside was a newspaper clipping, a typed letter, a transcription and a much-folded old letter with a corner torn off dated 1798. The neat signature on the bottom of the letter read ‘Horatio Nelson’.

The State Library has thousands of signatures of the famous (and the not-so-famous) scattered through its archival and special collections. There are numerous prominent Australians – as you would expect. People such as Ross and Keith Smith, Donald Bradman, Daisy Bates, and Catherine Helen Spence, for example. But in its special collections, there are also signatures of world-famous people of the past, household names such as Charles Darwin, Isaac Newton, and Queen Elizabeth the First.

Examples of signatures from the collection

Letter written by Charles Darwin, Down, Bromley, Kent, England, to Dr H.G. Bronn (in Germany?) in which he discusses a possible German translation of 'Origin of Species'. SLSA: D 4639/3

Ross Smith's signature features on the back of a Queens School dinner menu. SLSA: PRG 301/1/3/1v 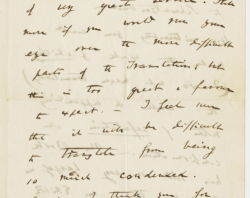 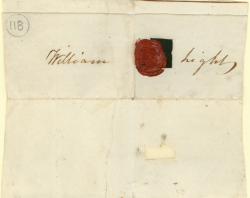 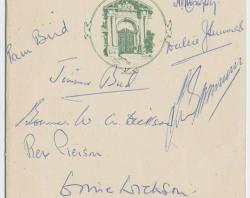 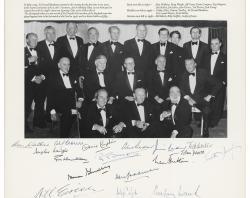 Planning an exhibition of famous autographs, librarians Mark Gilbert and Anthony Laube listed the obvious names. ‘There’s the Nelson letter,’ Anthony reminded Mark, ‘I think we had better get it catalogued.’ So, the letter which had languished for decades in its brown envelope was conserved and catalogued, placed in the State Library’s vault for precious materials.

But, Anthony pondered, how did the letter from the famous English admiral commemorated by the iconic column in Trafalgar Square, London, come to be in the State Library of South Australia? Was it genuine? An internet search brought up a few duplicates of the letter in collections across the UK and even offered for sale by famous auction houses as originals. Was the State Library’s copy simply a clever copy?

Envelopes did not come into common use until the mid-1800s, before that time, the paper used to write the letter was folded to form an outer layer for the address. As illustrated in the first page of Nelson’s letter to Mr Lloyd.

The other side of the letter that features Horatio Nelson’s signature.

Cropped image showing the address of the letter’s recipient.

Cropped image showing the first page of the letter to Thomas Lloyd Esq. 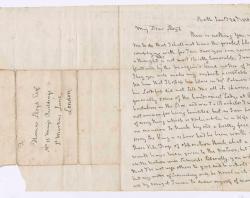 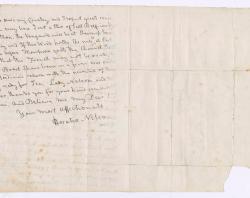 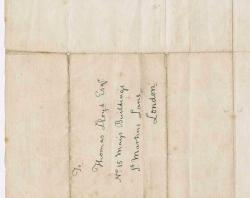 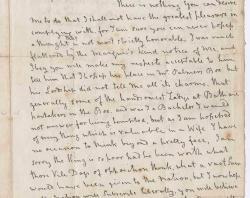 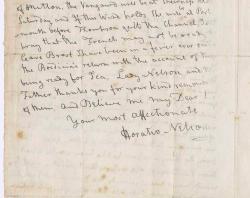 A little bit of research revealed the Nelson letter had once been owned by prominent Adelaide businessman Sydney Crawford, whose son Jim was a one-time Libraries Board member and the author of the ‘Crawford Report’ which established school-community libraries in South Australia. As a young man in Melbourne before the first World War, Sydney Crawford had been manager of the Elsternwick branch of the ES & A bank. A regular customer was an elderly man named J.G.T. Horne.

… One day he came to the Bank with quite a roll of old letters from famous people, all originals, and said he would like me to have one. … I selected Nelson’s letter.

Years later, in 1946, Sydney Crawford wrote to the archives of the Royal Admiralty in London querying whether the Nelson letter could be genuine. The Admiralty Librarian replied stating that in the nineteenth-century commercial facsimiles of the letter had been freely available,

The document in your possession may be the original, but is perhaps a facsimile … The facsimiles have no watermark, while it is most probable that the original would have one.

The letter held by the State Library has a watermark – the mark of quality paper woven into the page during the manufacturing process. Individual papermakers had their own, often quite elaborate, watermarks. In fact, a few years earlier librarian Valerie Sitters had researched the watermark of the Nelson letter and discovered that the paper had been produced by James Whatman, a maker of high-quality paper in Kent, between 1748 and 1805.

Prominent paper historian and forgery expert, Peter Bower, visited Adelaide in 2004 as part of a lecture tour, whilst here he visited the birthplace of his great grandmother (who had at one time run away to sea during a bushfire to escape her bossy stepmother!). Peter remained a friend to Anthony, who contacted him about the letter and sent details of the paper and photographs of its watermark.

Peter was excited by the query ‘meat and drink to me’, he said. Peter was able to narrow the date of the paper down to about 1790 and even tell us that the paper was sold in sets of 24 folded sheets. Peter further stated that,

One important detail that I omitted from my previous email is the way the letter is folder and addressed. In the time before envelopes were invented letters were folded in a simple manner that kept the contents private, particularly if, as was common but not found in every letter, the edges of the fold were sealed with a wax seal. The folds in the copy that was withdrawn from the Shrewsbury sale do not make sense, nor does the position of the address, whereas the folds and the position of the address in your copy are absolutely right for a letter with a 1798 date.

Putting together the pieces of the letter’s history with Peter Bower’s expert knowledge, the evidence seemed conclusive: the State Library has a letter written by Horatio Nelson in 1798 –six months after losing his right hand in battle– to his friend Thomas Lloyd.

It is a chatty letter very reminiscent of a Jane Austen novel, describing a night at the theatre in Bath where

‘generally, some of the handsomest Ladys at Bath are partakers in the Box, and was I a bachelor I would not answer for being tempted but as I am possessed of everything which is valuable in a wife I have no occasion to think beyond a pretty face …’