Englishman Arthur Jones had undertaken flights in other parts of Australia before venturing to Adelaide to thrill us with the magic of powered flight. He flew a number of times around his 'base' at the Cheltenham Racecourse, flying as far as Hindmarsh. These flights included what we would know as 'joy flights', one of which took Miss Dorothy 'Dot' Duncan, the daughter of Horace Duncan owner of the Gresham Hotel, over the racecourse making her South Australia's first female aviator.

On the back of this wonderful photograph is written: First successful aeroplane flight over Adelaide (A.W. Jones, pilot) / Jan. 2, 1914. The small bi-plane flies over a perfect snapshot of North Terrace. Photographer Henry Krischock. SLSA: B 285

The intrepid pilot however was determined to fly over the city itself. Jones took off from the racecourse at 6.30am on 2 January 1914. After flying over the city he turned back to Cheltenham.

The air above Adelaide had been successfully negotiated in the Caudron biplane, and the 23 year-old aviator had attained the distinction of being the first man to fly over the Queen City of the South.

However, all did not go as planned. 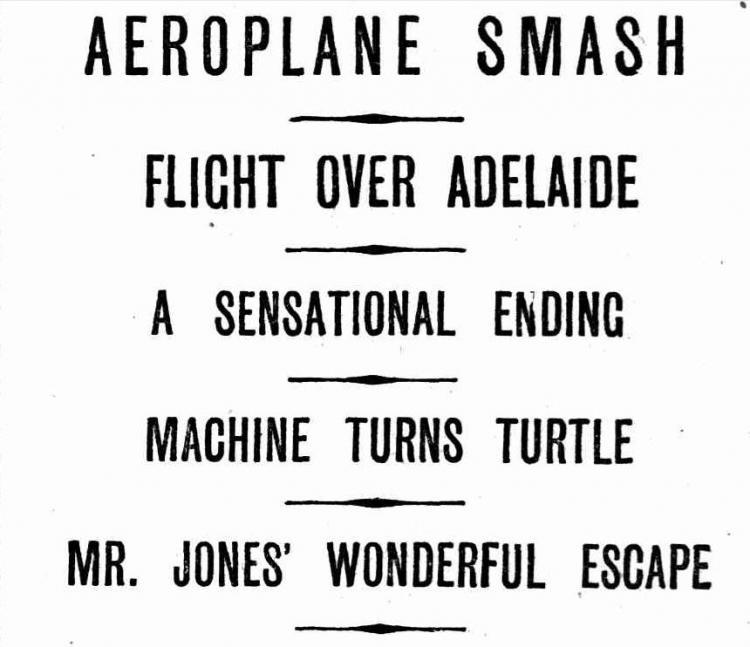 On the way back to Cheltenham Jones went off course to the north, before returning to his correct course. This meant that he ran out of petrol with Cheltenham in sight and was forced to make a crash landing in a paddock on the north side of Torrens Road.

...suddenly, his engine was seen to stop and he started to volplane down to earth with only the force of gravity to help him. A gust of wind struck the machine when he was about 70 ft. up and, to the horror of the spectators, the aeroplane dived nose first to the earth and then turned completely over. [hence the  headline Machine turns turtle].

Luckily his only injuries were a strained left arm and cuts to his knees and mouth. Extensive damage was done to the plane with both sides of the body crumpled, the chassis ruined, control wires and rudders twisted, and the skids and other woodwork snapped like matchwood.

The Express and Telegraph went on to report Jones' lamenting,

The heartbreaking part of it is that a cup full of petrol would have saved it all. If I could have had enough to last me a minute or ten seconds, or even five, I could have come down safely.

The whole flight had lasted about 16 minutes. The dapper pilot Arthur Jones in the Express and Telegraph, 2 Jan 1914.

In May of 1914 Arthur's love of speed caused him to be fined when he drove his motor car along King William Road toward North Adelaide. He was travelling at 25 miles per hour (40kph) - 10mph over the limit.

The photograph of the flight over North Terrace was taken by Henry Krischock and shows the beautiful Institute and Jervois (now Mortlock) buildings of the State Library as well as the SA Museum, and the sadly demolished Exhibition Building with its dome.