Since antiquity, the practice of posting up hand-drawn public notices has been a major source of communication. Even in the internet age, posters continue to be created daily around the world, although few are now produced by hand.

Posters were one of the earliest forms of advertisement but it wasn’t until the early 19th century that they became the visual media we know today. They influenced the development of typography and became a staple of the graphic design trade. As they had to be read from a distance the larger type required was usually made from wood rather than metal. Posters were used to promote political parties, recruit soldiers, advertise products and events, spread ideas, and convey information to the general public.

Posters, as we know them today, are said to have begun in 1866 when French poster artist Jules Chéret (1836 - 1932) began producing colour lithograph posters, having improved the black and white process invented by Alois Senefelder in 1798. Lithographic printing involves drawing a design in waxy crayon onto a smooth surface, usually a limestone block or metal plate, which is doused with water and covered in an oil-based ink. The waxy-drawn areas repel the water and soak up the ink before being transferred to the paper.  Most posters are still printed lithographically today, although the process is now mechanised with the image transferred from a metal plate to a rubber roller before printing.

Amongst the State Library’s 64 kilometres of storage (that’s the approximate equivalent of walking around the perimeter of the Adelaide Oval 69 times, or walking the length of the Sydney Harbour Bridge 55 times!) lie a group of cabinets containing the bulk of the Library’s South Australian poster collection – over 12,000 of them, spanning the last 120 years. The collection includes posters of various sizes  (large, small) and includes Adelaide Festival and Fringe posters.

Once digitised the poster collection will be available to the public online (copyright and other restrictions allowing). Digitisation not only allows many of the State Library’s collections to be available from anywhere there’s an internet connection, but it also reduces handling of the originals, helping to preserve them. The other benefit of digitising the posters is that the catalogue record gives little idea of what is actually on the poster. Being able to view an image will help customers to track down posters relevant to their research.

Why are posters a valuable research subject?

Over time, posters can show changes in design, typefaces, paper, prices, government priorities, social issues, how people spend their leisure, and the rise and fall of groups, trends and organisations. Many are works of art as well as information carriers.

During the audit, we’ve come to think of posters being in two main groups: blasts from the past and history repeating. Check out the following poster samples for an idea of what’s in the collection.

Blasts from the past

It is interesting looking at the themes of some of the posters and how much has changed over the years.

1910 – The rules of what would become the State Library of South Australia included no spitting on the floor, no leaning on the newspaper stands, and not turning the pages of newspapers noisily as to disturb other patrons.

1916 – SA introduces an Amusements Duty: basically, unless there’s an exemption, no “amusement” (cinema, horse racing, etc) can be held unless the appropriate Duty has been paid. Rates are based on admission prices to the event.

1976 – A seat at the premier of David Williamson’s new play at Adelaide’s Playhouse Theatre cost $4.80!

c.1980 – A KESAB and the Litter Council of South Australia poster featuring information about littering fines.
"Littering. It isn't worth the shame of a $20 fine. Drop it and you cop it!"

1987 – Grand prize in the SA Double Chance Lottery is a house and land package at North Point Marina – value: $180,000. Such a humble home compared to some of today's mansions. 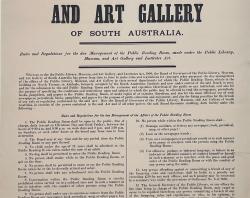 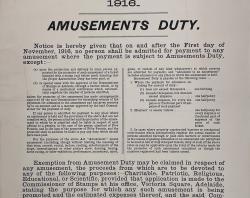 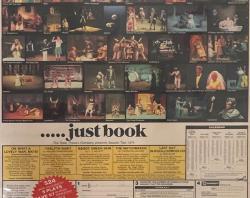 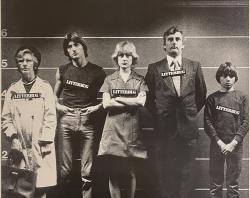 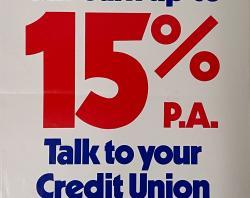 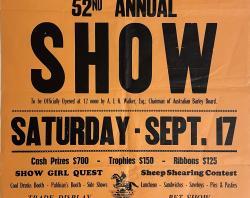 We've been finding themes of posters from the past that still have relevance to the issues of today.

1900 – Bakehouses, Regulation 9: “No person suffering, or who has recently suffered, from any infectious or contagious epidemic disease shall be permitted to enter the bakehouse, or take part in the manufacture or sale on the premises of bread, biscuits, or confectionery.”

Circa 1985 – A Life. Be in it picnic in Bonython Park, featuring a map of the park with activities for attendees to take part in. Encouraging participation, health and wellbeing is still relevant today.

"Where are we heading? What can we do? What should we do?"

1988 – Domestic Violence and the Family Court, phone in. 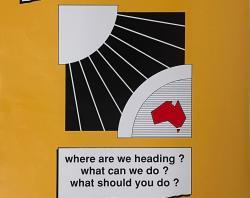 The poster digitisation project will be completed over a few years, so as we audit the posters we will share with you more ‘blasts from the past’ and ‘history repeating’ that we find in the stacks.