Artist John Michael Skipper sketched many aspects of colonial South Australia, including the landscape, Adelaide streets, buildings, people, and notable events. Skipper made several sketches of Lola Montez when she appeared at the (Royal) Victoria Theatre.

Lola Montez, Irish-born actress and dancer sailed from America to Australia in 1855, to appear on stage in Sydney, Melbourne, and Adelaide. As a burlesque, comedy, and drama performer, she had appeared in theatres in Europe and America, particularly in New Orleans and the Californian goldfields. Lola was one of the best-known women of the Victorian era. As well as her stage performances, her turbulent private life, which included liaisons with Alexandre Dumas and Franz Liszt, provoked enormous interest when she visited Australia. 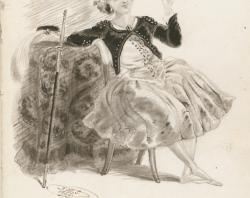 Her dance repertoire included the notorious and frenetic 'Spider Dance'. It was reported that when she performed this in front of King Ludwig I of Bavaria, he asked 'But my dear, are they real?' in reference to the spiders. Affronted, Lola ripped away from her upper garment and retorted 'But of course!'. The 'Spider Dance' was seen by some as sexually provocative and immoral and caused consternation among audiences in the eastern colonies. There, the newspapers denigrated her performances and she was threatened with legal action.

She performed to standing-room-only audiences, giving numerous performances from 26 November to 31 December 1855. The local press recorded extremely complimentary reviews. For example on 1 December 1855, the Adelaide Times described her performance as 'a brilliant triumph'.

In 1856 Lola performed at the Ballarat goldfields in Victoria, to extremely appreciative miners, who reputedly showered the stage with gold nuggets. Relations were not so positive with the editor of a Ballarat newspaper. Lola believed that Harry Seekamp had slandered her, so she publically horse-whipped him. In 1858 she returned to America, where she gave lectures about fashion and beauty and worked in New York with destitute women at the Magdalen Asylum. She died in New York in 1861.

ABOUT THE COLLECTION ITEM