South Australians have a long tradition of giving and of offering a helping hand. Sometimes that’s not easy. As Christmas approaches it’s easy to be overwhelmed by recent events. Fires, flood, protests, the COVID19 pandemic with all its accompanying separation and anxiety continue to cause pain. But despite the hardship, people continue to show kindness within their communities and to strangers. And what else is Christmas about if not to remind us, whatever our beliefs, that wherever there are people, there can also be the twin spirits of hope and of giving.

A sprig of parsley

In the early 1930s The Adelaide Chronicle ran a long-running series of readers’ stories called ‘Real Life Stories of South Australia’. ‘A Sprig of Parsley’ was published over the name ‘Bert the Carpenter’ in 1934.

Bert relates a tale told to him by an elderly lady who had shown him a treasured possession, a few tiny leaves dried between the pages of a book. As a child she had emigrated with her family to Australia from Saxony in late 1853. The Eisebrock (most likely the Iserbrook) carried approximately 70 German immigrants, including around 20 children. They found themselves still at sea in December. The voyage was extremely long and wearing and rationing was in place. Yet somehow a small miracle took place. On Christmas Eve the families were ushered into the saloon to see the Christmas tree.

“a real little pine tree standing on the table, with bright and fresh green leaves. Behind it stood the ship's carpenter, an old man with a long white beard, looking like Santa Claus himself, and we learned that we owed the tree to him.

When leaving port he had put a little pine tree on board for just such a purpose…but when he went to look at it a few weeks before Christmas, he found that the rats had eaten all the needles off, leaving nothing but bare sticks. He was very disappointed, and, after trying to make artificial foliage, he had an inspiration.

From the ballast in the hold he took some earthy sand and washed all the salt out of it with some of his allowance of drinking water. Then he put it in a little basket, sowed parsley seed in it, and hung it at the head of the main-mast, where it would be out of reach of the salt spray. Twice a day he climbed that mast to water the parsley with fresh water from his drinking allowance, swearing the sailors to secrecy…On Christmas Eve he took the basket down again, got out the dead pine tree, and on each twig end he tied a fresh green parsley leaf.

We had been months at sea without seeing a flower or a blade of green grass; quite a lot of the older people had tears in their eyes when they saw what the old carpenter had done. We children could scarcely believe our eyes at first when we saw that the leaves were real.”

Origins of the John Martin's Pageant

A few months before The Chronicle printed ‘A Sprig of Parsley’, another act of giving took place, this time on land.

Hannah Tobin, aged 22 and a friend dressed in period costume for the first 1933 Christmas Pageant. Participants in the first John Martin’s Pageant. SLSA:  B 70614

Members of the Sturt Street School drum and fife band accompanying young dancers. According to a researcher, this picture may be of the Adelaide College of Music Drum and Fife Band at the Tivoli Theatre in 1948. The uniforms and peak caps of that year were similar. Mr. L.E.(Laurie) Arthur was Conductor of both bands until he transferred to the Thebarton Boys Primary School where he formed a new band. Again the uniforms were similar except now the caps were side caps. All three bands marched in the John Martin's Christmas Pageant in the late 1940s.

William Gray, the first Father Christmas at the Magic Cave in John Martins in 1905, is photographed wearing his costume at the reins of a horse drawn buggy with members of his family as passengers.

Two floats from the John Martins Christmas pageant in Adelaide, South Australia; one represents a Christmas cake and the other a Christmas pudding, 1939. SLSA: B 63653

Elsie Sowton member of the 5CL Bluebird Choir  SLSA: B 56270

Elsie Sowton, who was the "Bird Lady" on 5CL's Bluebirds' Girls' Club, with toys made by members of the 5CL Bluebird Choir to be given away to people in need at Christmas. A photograph of her Father, Mr. Burgess, a prominent Methodist Minister, hangs on the wall.  App 1934 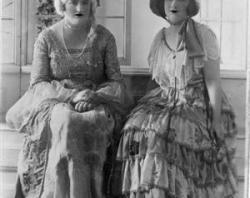 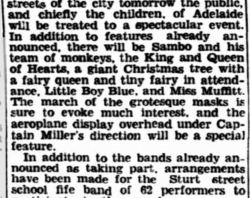 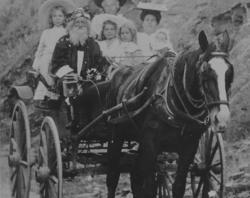 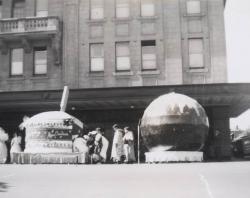 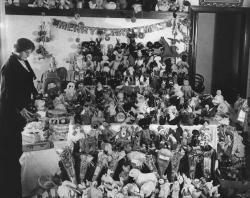 'its main purpose was to provide fun, and it discharged it, better than any procession has for years'

Children left the pageant 'filled with the happiest of thoughts'

Initially ended to be a once-only event, John Martin's (Johnnie’s) Christmas Pageant went on to become a South Australian tradition that has continued ever since, broken only during World War Two, and restored in 1945. David Jones Ltd. acquired John Martin’s in 1985 but the Christmas Pageant continued until it was acquired by the South Australian Government in the mid-1990s. Naming rights and sponsorship have changed several times since, but the event continues. In 2019 it was acquired by National Pharmacies. Due to the COVID19 pandemic the street parade had to be changed in 2020 and 2021 to an arena event at the Adelaide Oval with tickets drawn by ballot. Masks were mandatory. Despite the changes, the pageant remains a gift to the people of South Australia. And it’s not the only one.

Throughout each year, but especially at Christmas, organisations across the state distribute gifts, food, and support to those who need a hand. The State Library holds a number of recent historic photographs, mainly taken by The Messenger Press, of some of the South Australians who have been involved in Christmas drives. People from all over the state contribute and their donations of items and money are vital.

Project organiser John Messer and his children Kimberley (8) and David (6) enter into the spirit of Christmas beneath the Blackwood Giving Tree. 30 November 1988. Image courtesy of Messenger Press, 1988. SLSA: B 70869/1837 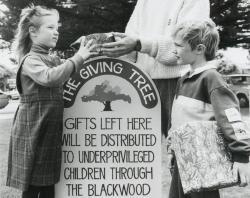 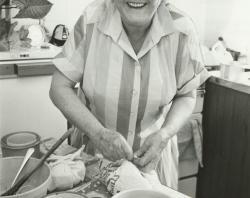 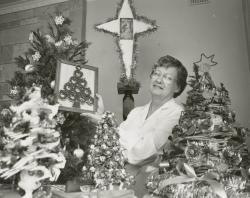 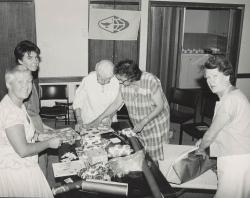 Larger organisations all put in extra effort at this time of year. The Smith Family, the Salvos, Anglicare, Red Cross, Foodbank, Rotary, Lions, Kiwanis are just a few of many. Then there are the dozens of smaller local community and church-run organisations.

Pressies all round! Wrapping Christmas gifts for about 120 needy families are Noarlunga Anglican Welfare workers Les Hart and Sharon Donald. Each year the service gives gifts to the south's less fortunate people. Image courtesy of Messenger Press, 1987. SLSA: B 70869/1591A 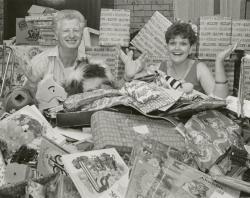 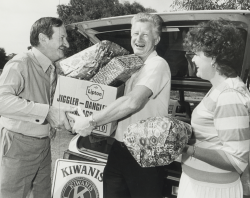 Homeless shelters work overtime, especially on Christmas Day to provide meals and somewhere cheerful to go. But none of these endeavours could run without donations and the hundreds of volunteers who organise, collect, pack, deliver and provide. People across the state give goods, cash, time, energy and most of all, their goodwill.

And in December 2021, when we hope for happier times, what better way to celebrate the spirit of Christmas.