When the Library was recently offered a wooden Noah’s Ark we recognised straight away there was something special and appealing about this toy. As we began to research this collectable British antique, a story of war, migration and children’s play history began to open up.

The Ark is a hand-painted church-shaped design and measures about 50 x 30 cm. A complete set of this toy would have included up to 48 little carved wooden animals including hippos, frogs, tigers, rhinos, lions, squirrels, parrots, horses and the figures of Mr and Mrs Noah. The top of the Ark is hinged on both sides so that it can be opened and the figures taken out and put away safely inside.

The War Relief Toy Works factory was established in London after the First World War as a charity to employ soldiers wounded of body and mind. They produced wooden toys which were distributed to orphans and families in hardship after war. Some were sent to branches of the charity in Australia and the United States, such is the reach of war.

The Noah’s Ark was the most common toy produced at the factory. In some sets the animals were elaborately painted and in others they were left plain, perhaps with the intention that someone might like to paint them.

The rehabilitating soldiers also made wooden building blocks, solid wooden animals, farmhouse sets, windmill sets and skittles in a box. The toys were exhibited in 1922 and 1929 at trade fairs organised by British Industries to showcase home-crafted goods, at which many hundreds of producers displayed their work.

One wonders what it may have been like for those fellows who found themselves whittling wooden animals after goodness knows what had happened to them. For some a relief perhaps, for others who can know?

The Ark is completely hollow to house a full contingent of animals. Alas, all the little figures are now gone.

We also noticed the intriguing peace dove motif above the doors of the Ark which reads ‘War Relief Toy Work’. 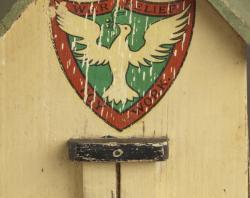 The journey to Adelaide begins

It is believed this play-worn Ark was brought to Adelaide after the Second World War by a British migrant family living at the Finsbury (later Pennington) Migrant Hostel. The family donated the Ark to the nearby Pennington Primary School during the 1960s, for their library of play equipment.

Jenny, the lady who salvaged the Ark from the school in 2014, had worked there as a School Services Officer for almost 30 years from the late 1970s. She scrambled to salvage some toys during the demolition of some school buildings and grabbed the Ark as throughout her school career she had seen three generations of children play with it. She said,

During the very early days of my time I recall seeing children playing with a scattering of little wooden animal figures on the carpeted library floor. The activity taught them to identify each animal, discuss their sounds and find their partners before returning them to the Ark via its hinged roof.

Over the years Jenny saw migrant children from the UK, Holland, Spain, Italy, Vietnam, Indo China, Cambodia, Afghanistan, and Sudan all play with the Ark. Many resided at the Pennington Hostel after arriving in Australia.

Of course, we know now that the wooden animal figures were not always returned to the Ark after play. Being so portable they may have been used for other play or taken outside to the sandpit. Perhaps we need an archaeological dig at the old school site!

After many years of storing the Ark in her shed, Jenny decided to offer it to the State Library’s Children’s Literature Research Collection. We were keen to ‘adopt’ and care for the Ark as it charmed us with its interesting story and lovely form.

Can you help solve the mystery?

Did you happen to play with this Noah’s Ark toy at Pennington Primary School? Are you perhaps a person of interest in our search for the missing animals?

If you can help uncover more pieces of this fascinating story we’d love to hear from you by either phone  (08) 8207 7250 or email slsainfo@sa.gov.au. ​