This rather grotesque-looking object is a mechanical savings bank in the shape of two frogs, the design for which was patented by James H. Bowen in the United States of America in 1882 and manufactured by a banking company. It is part of the Children’s Literature Research Collection held at the State Library of South Australia, which includes a renowned collection of historical toys and other keepsakes of childhood, which the community has donated to the Library over many decades.

Side view of the mouth mechanism open on the Bullfrog toy savings bank (SLSA: clrcri15835224-3) 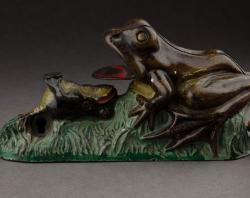 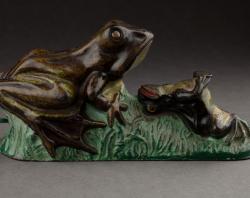 Frogs are a common motif for savings banks/money boxes, probably because of the wide gaping mouth which just invites the depositing of a coin. These particular savings banks were originally marketed in the US as The Bullfrog Bank or Frog Bank and most commentary, including the patent, indicate that it was a toy or intended especially for children.

This coin collecting contraption is cast from iron and is quite weighty at just over 1 kilogram. The final product was painted and the eyes of the frogs are composed of glass and coloured by pigment. The design is a larger frog (coin receptacle) facing a smaller ‘baby’ frog lying on its back, which is the stand to hold coins. The coins are flipped into the larger frog's mouth using the smaller frog's kicking-leg lever and is supposed to look as though the larger frog is catching its prey. Inside is a mechanism to operate the action of the coin strike and flip. After operating, the projecting device is apparently automatically returned to its normal position. The ‘kicking leg’ is missing from this example, along with the circular cover of the aperture to retrieve the coins.  Intact, operational examples in good condition are rare and occasionally appear on auction websites with a frenzied sales pitch.

A short article, The Two Frogs Bank by Sy Schreckinger (ANTIQUE TOY WORLD Magazine, March 1983) gives a detailed description of the object, and its quaint eccentricities, including the fact that the patent showed a gear mechanism which was supposed to sound like croaking frogs but wasn’t (mercifully) included in the final product.